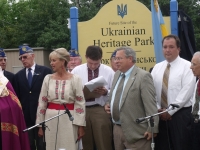 On Sunday August 22, a Groundbreaking Ceremony was held in Ukrainian Village at the future site of what will be Ukrainian Heritage Park. This eagerly anticipated event took place as the result of the efforts of many dedicated individuals, especially all of the members of the United Ukrainian Organizations Of Ohio, which represents over fifty Ukrainian organizations throughout the state. The event was well attended, with a large, enthusiastic crowd overflowing into State Rd. in front of the future park site. Like all events in Ukrainian Village which I have had the pleasure to attend, this one was as meticulously planned as any other. Any group planning any event anywhere can learn a lot from the folks in Ukrainian Village- they really know how to celebrate the moment; nothing ever seems to be left to chance, and their hallmark is clock-like efficiency. Even the weather seemed to cooperate, as what seemed to be imminent rain subsided just in time, and the sun actually started to show itself as the ceremony began.

Besides city officials in attendance, there were numerous clergy present, in order to bless the site, which they did in a fashion that is truly an amazing visual and audio experience. Music is obviously a large part of the Ukrainian culture, and what a treat it was to see and hear the vocal chorus that was assembled to accompany the clergy members throughout the blessing ceremony, lifting their unified voices in celebration. I was thinking to myself as they sang "we are so very lucky to have this unique culture concentrated right here in the middle of our city". Next to me was an elderly gentleman dressed in a military uniform with a patch that indicated he had taken part in the Ukrainian resistance during World War Two, and the smile on his face as he watched and listened showed just how far these Ukrainian people have come and what they have been through in order to celebrate a triumphant day such as this.

Masters of Ceremonies were Roman Fedkiv and Maria Kvit-Flynn, who is the Vice President of the United Ukrainian Organizations of Ohio. Reverand John Nakonachny officiated the religious part of the ceremony, speaking in both English and Ukrainian to the assembled crowd, many who were dressed in the very colorful native Ukrainian fashions that were evident all over Ukrainian Village. City officials in attendance were Council President Chuck Germana, and Community Services and Economic Development Director Eric Tollerup. Mayor DePiero was scheduled to attend, but instead was in attendance at an event of even more importance, that of the birth of the DePiero Family's first child! Council President Chuck Germana spoke eloquently as he conveyed the wishes of the entire community for the success and happiness of Ukrainian Village as they enjoy their growth and prosperity here in the City of Parma. Community Services and Economic Development Director Eric Tollerup was recognized by officials from Ukrainian Village as being one of the most important individuals behind not only the creation of this park, but also of the formation of Ukrainian Village itself. Knowing this little known fact myself, and of so many other activities he has been involved in concerning the quality of life in our city, I would say that Eric Tollerup is a true unsung hero, in my opinion.

Go to our website at www.parmaobserver to view a video of this important event!