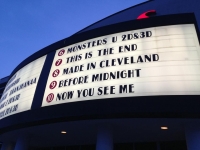 Made In Cleveland Marqee Photo (Photo by Gina Stem)

It is not every day that the world-premier of a locally made film sells out, but one long-time Parma resident and local film producer, Mark Pengryn, is looking to put the Greater Cleveland area on the map in a very big way. He, along with fellow film director and Lakewood resident, Eric Swinderman, well-acquainted with the making of various short films, head up the locally based film production company known as 1031 Films, LLC and have been hard at work since 2011 putting together a new masterpiece featuring an incredible cast and crew with deep Cleveland-area roots. The masterpiece I’m talking about is called Made in Cleveland.

Made In Cleveland, starring Busy Philipps (Cougar Town) and Gillian Jacobs (Community) as well as local news celebrities Robin Swoboda and Leon Bibb, is a collaborative film project comprised of nine short films from 12 of the Cleveland area’s most acclaimed writers and directors. It is also the first feature-length anthology film made by 1031 Films, LLC. The film features an eclectic mix of entertaining stories such as an old war hero defending the honor and memory of a long-lost love (“Corned Beef and Mamie O'Rourke”), a desperate man employing his friends in a zany scheme to meet the girl of his dreams (“Wingmen”), and a young couple in a library who creatively use book titles to express their affection for one another (“Book of Love”).

Book of Love, in particular, is sure to be popular with audiences in this delightful collection of stories. It features a romantic lothario attempting to charm the girl of his dreams by dazzling her with his wit and creativity. “I love how the protagonist in this vignette attempts to express his love in a sweet, unconventional way,” says Pengryn. It has yet to be seen if any library can truly silence the expressions of love and affection as seen in this film.

If the sold out world premier of Made In Cleveland is any indicator, this film appears to have garnered some well-deserved buzz in various publications and is set to make waves in the indie filmmaking world. It also does much to showcase the amazing talent that Cleveland possesses at a time when numerous blockbuster films such as The Avengers, Captain America 2: The Winter Soldier, and Draft Day are being filmed in the Greater Cleveland area.

No doubt about it - this talented dynamic duo of Pengryn and Swinderman, along with the cast and crew they have employed, are taking Cleveland filmmaking to the next level with their latest high-quality offering – Made in Cleveland. Each new project they work on is better than the last and all indications suggest that this will continue to be the case into the foreseeable future. The limited theatrical release starts on Friday, June 21st at all North Eastern Ohio Atlas Cinemas.