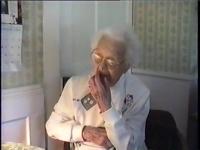 Emily remembering her past.

Emily Duff lived in the Froehlich House on Broadview Road from the day of her birth on June 24, 1902 until her death on January 5, 2006. Her parents Emma and Conrad Apel bought the house from the Froehlich Family in 1896. It had been built by the John Froehlich in 1843. Although the kitchen and bathroom were upgraded, the home retained its character of an earlier day. The original white wainscoting extended around the walls of the rooms. The floors were wide, random-width pine. Crisp, white Priscilla curtains covered the original windows, with their twelve lights. Large quarry stones made up the floor of the cellar. On one side of the cellar, steps led to a door at ground level. This was used to roll down barrels which carried supplies that were stored in the cellar.

While researching the history of the West Creek Valley, I was frequently told that Emily Duff would be a good source of information on the area.

I was very fortunate to be able to interview Emily a few months before her death.  And even at 103, she was spry and delightful with a sharp mind and a keen sense of humor. She still baked cookies and made jelly using the Concord grapes that grew in her back yard. A golfer all her adult life, she played until she was 96, even winning a prize of thirteen "golden" dollars.

Her early years were filled with hard work, not only because this was routine for farm children in her day, but also because her older brother had injured his hands and could no longer do the work. He tried to restrain runaway horses and the chains he used caused serious injury to his hands.

As the oldest of her three sisters, many of the farm chores became her responsibility. Potato bugs needed to be picked by hand from the potato plants. Tomato plants had large green caterpillars that had to be found and removed from the plants. There were at least three acres of grapes that needed constant attention, pruning, coaxing the tendrils to remain on the grape arbor. At harvest time, grapes had to be picked and prepared for use or storage. The cows needed attention, but they made their own pathway down to West Creek to get water. They kept the underbrush cleared by their constant chewing when they were put to pasture. They even chewed off the lower leaves of the trees.

Shopping required a trip to West 25th Street. In the early days, a horse-drawn wagon was used for the trip. On the way back, the horses would know to stop at Herbst's Tavern at the bottom of Broadview Road hill. There Mrs. Herbst would provide a supper for the men. There was no charge for the supper, but beer cost five cents a glass. Emily remembered that Mrs. Herbst prepared a pork sandwich for her.  This was a treat that still brought back good memories.

Keeping warm while traveling in a wagon or sleigh required the use of heated stones.  Travelers would place their feet on the heated stones. Straw was also used to keep the cold away, as well as blankets and scarves.

Broadview Road, called Town Line Road at the time, was a toll road. At each toll booth a dime was collected to continue on the road. The road was a plank road constructed with eight-foot wide planks. In 1909, the road was paved with red bricks. In 1911, a bus line ran from Wallings to Brookpark Road. Emily and her sisters would take the bus and carry back the supplies and groceries from shopping along West 25th Street.

After Emily's father died in 1915, managing the farm and its chores became a struggle for her mother, her sisters, and herself.  But they managed to survive. In 1923, Emily married Alexander Duff. Alex moved into the family home and lived there until his death in 1968.

Emily and her husband had "Duff's Store" where "The Store" now stands. Since they had the only telephone in the area, Alex became the person on the Volunteer Fire Squad who received the emergency calls and who had to round up enough men to put out the fire. This took so long that many fires did not get the necessary early attention, much to the chagrin of the home owner.

One of Emily's first jobs was with the Telling Belle Vernon Milk Company. Her station was next to one of the Tellings' sons. In 1926, she worked at GE, preparing payroll records. In 1960, her sister was employed at GE and Emily was asked to return even though she was now near the age of required retirement.

A cut glass vase Emily won as a child became one of her prized possessions. She used the base to cut out cookies, the deep cuts in the base made a lacy pattern on her cookies. The vase was displayed on a shelf that looks as old as the house. But this was not a shelf originally. It was the decorative top of a small cabinet. Emily removed the top and inverted it to be made into a shelf. The cabinet had lost its original use, but held small objects in her kitchen. The cabinet was used to hold the chamber pot found in every home before the advent of indoor plumbing.

Emily had a decorative pillow in her living room that describes her so well. It said, “Age is only a number and mine is unlisted."

I am a member of the Board of Directors of West Creek Conservancy.  I was a high school teacher of English, American History, and American Government.