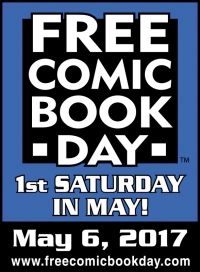 This year, Free Comic Book Day is celebrating its 16th year introducing readers to the wonders of comics and falls on Saturday, May 6.

There will be up to 50 titles that may be available at each participating location. DC Entertainment, Image Comics, Bongo Comics, and Marvel Comics will be among the many publishers offering titles that include Betty & Veronica, Teenage Mutant Ninja Turtles, Guardians of the Galaxy, The Tick, Attack on Titan, Animal Jam, Wonder Woman, and Doctor Who!

Fortunately for Parma area residents, there are two incredible comic book shops participating in this annual event: B & L Comics and North Coast Nostalgia, both of which are conveniently located along Ridge Road in Parma's Polish Village. Special highlights include the Joker at B & L Comics and Ted Sikura at North Coast Nostalgia, who will be selling and signing copies of “Apama: The Undiscovered Animal, Vol. 2,” which contains six all-new issues featuring Cleveland’s own resident superhero.

As is often the case on Free Comic Book Day, lines of colorfully costumed crusaders will likely already be forming as shops are about to open and each shop usually offers a different mix of comics.

Consider visiting both of Parma's fantastic comic book shops to find just what you're looking for on Free Comic Book Day!

Check out FreeComicBookDay.com for more information.

Stefan P. Stefaniuk has been a Parma, Ohio resident since 1982 and enjoyed growing up in Parma's incredible historic downtown neighborhood. After serving five years in the U.S. Navy, he was honorably discharged in 2009 and returned to Parma, where he now resides with his wife and three children.