P Jay's Pizza Is Business Of The Month 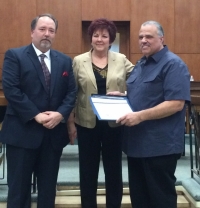 This month’s Business of the Month is P Jay's Pizza located in the heart of Polish Village at 5859 Ridge Road. Mayor DeGeeter is honoring this business, not only for the food, but for the sense of community pride in this clean and well-run establishment. P. Jay’s opened in April, 1993 and has given back to the community in various ways during those 24 years - donating their famous pizza to numerous schools, churches, and charity events in the Parma area, sponsoring dozens of Parma Recreation leagues with t-shirts, and sponsoring Polish Village events. P. Jay’s Pizza has brought plenty of good publicity to Parma as well, with numerous awards for the pizza - Final Four Finalist in the Plain Dealer (Judge’s Choice Best Pizza in the southwest region in 2011), Cleveland Magazine’s Best of Cleveland Specialty Pizza award for the Pierogi Pizza in 2012, and for two years in a row, People's Choice Specialty Pizza winner (Potato Pierogi Pizza) at the Old Brooklyn Pizza Brawl at St. Mary's Byzantine Church. Congratulations to P. Jay’s Pizza and owner Chris Mastroianni, pictured here with Economic Development Director Erik Tollerup and Ward Two Councilwoman Debbie Lime, for being named Business of the Month.

Communications Director for the City of Parma