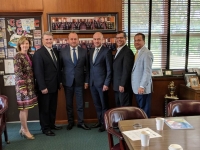 The mayor of the Ukrainian city of Ternopil visited Parma in early June as a prelude to the two communities forming a sister-city partnership. During the visit, Ternopil Mayor Sergiy Nadal and Parma Mayor Tim DeGeeter signed a memorandum of intent to establish the partnership as a way to foster economic development and educational opportunities as well as strengthen cultural and civic bonds between the two cities. “Mayor Nadal is one of Ukraine’s most progressive mayors, and he reached out to us seeking to establish a relationship with Parma,” said DeGeeter, who exchanged gifts with his Ukrainian counterpart to commemorate the visit.  “Both of us believe this developing relationship could prove beneficial to both cities.”

Soon, the administration will ask Parma City Council to consider passing legislation to establish a sister-city relationship with Ternopil, DeGeeter said. “The connection between our two communities has real potential, particularly when considering a large portion of our Ukrainian-American community emigrated from Ternopil,” he said.

Beyond formalizing the relationship with the two cities, Nadal’s visit from June 6 to June 9 included a packed itinerary that gave him an opportunity to learn about Parma – such as tours of Ukrainian Village and the Watershed Stewardship Center and stops at Parma City Hall and the Parma Rib & Rock Festival. Nadal’s visit underscored the already-existing bond between Parma and Ternopil, said Ward 4 Councilwoman Kristin Saban, who met up with the mayor during his stop in Ukrainian Village. “It was a great experience to learn about Ternopil,” said Saban, who mentioned the Ukrainian city hosts championship powerboat racing on a lake in the center of the municipality.  “But what I really came away with is an understanding that a large number of Ukrainian-Americans in Parma are originally from Ternopil.”

For example, when Nadal walked into Rudy’s Strudel and Bakery, the mayor’s appearance elicited the same level of excitement as former Vice President Joe Biden’s campaign stop there in 2016, joked Lidia Trempe, who co-owns the business with her mother, Eugenia Polatajko. “My mom was really excited – she’s originally from Ternopil,” Trempe said.

Nadal’s visit to Parma not only showcased what the city has to offer, but also the cultural connection with Ternopil, she said. “Mayor Nadal seemed fascinated at how we continue to celebrate the culture and how far-reaching it is beyond the borders of Ukraine,” Trempe said.  “I think strengthening the relationship between the two cities is a positive step and only will encourage economic development and cultural exchanges important for both communities.”