Highly-Attended Pizza Bake Off Could Lead To New Parma Tradition 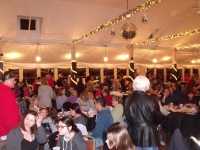 The German Central Organization Hall was filled to capacity, upstairs as well as downstairs.

The Young Professionals of Parma, in conjunction with the City of Parma and the City of Parma Heights, hosted its inaugural Parma-Area Pizza Bake Off on Thursday, January 24 at German Central. The event attracted an overwhelming response, bringing more than three times the attendance the group originally expected. The large attendance helped generate more proceeds than expected, which enabled the Young Professionals of Parma to donate a greater amount to the Parma Hunger Center. The group is grateful for the pizza vendors, sponsors, volunteers, attendees and music group The Baker’s Basement for making the event a success. “We were amazed, but excited, by the turnout,” said Jackie Baraona, president of the Young Professionals of Parma. “We got a lot more people than we expected, especially those who bought tickets at door, but we are touched by the community support and plan on holding the event at a bigger venue next year. Thank you to all our sponsors, donors and pizza vendors for making the event possible!”

The event included nine pizza vendors: Antonio’s, Casamel’s, Fratello’s, Guy’s, Napoleon’s, State Road, Giovanni’s and Master Pizza, along with Sloppy Bob’s bar and grill. Attendees sampled pizza and voted for their favorite slice. Giovanni’s Pizza won first place. “I really enjoyed the bake off,” said Amanda Keslar of Giovanni’s. “It was great to see the community coming together for an evening of fun. It turned our business completely around and we are busier than ever!” Master Pizza won second place, and Fratello’s and Napoleon’s Pizza tied for third. "Total success!” said Dave Lahman Jr. of Napoleon’s Pizza. “A great way to bring together a collection of the Parma community's own devoted pizza makers to showcase their talents. Cannot wait to be a part of it next year!"

Even with an extra crowded room, attendees also reported enjoying the event. On the Facebook event page, people commented on the friendly volunteers and vendors and getting to see neighbors in the winter months. Parma’s Mayor Tim DeGeeter sponsored the event and attended with his daughter. “My daughter Molly attended the Young Professionals’ first Parma Pizza Bake off and had such a fun and entertaining evening,” he said. “When Jackie first approached me about the Young Professionals hosting a pizza bake off, I couldn’t be more excited as I have always thought the city would support such an event. There was such a great turnout and positive response. It also was a charitable event, which is terrific. I also want to extend my appreciation to all the sponsors and especially to the pizza shops that participated, and congratulations to the winner.”

Parma City Council President Sean Brennan also sponsored and attended the event. “I am so proud of the Parma Young Professionals for working hard to prove what many of us already know, that Parma is a cool place to live!” he said. “The Pizza Bake Off was a huge hit and will, no doubt, become an annual Parma tradition.”

The Young Professionals of Parma is using feedback from attendees and sponsors to continue to make improvements for next year’s event.