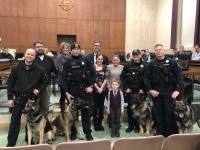 Lucas Woronischtsche, age 4, is the City of Parma's Citizen of the Month for January. He came to the council meeting on January 22nd sporting his tie, vest, new police haircut and adorable smile. Parma Mayor Tim DeGeeter and Ward 4 Councilwoman Kristin Saban presented Lucas and his mother, Rebecca Woronishchtsche, with the proclamation on Jan. 22 for his generosity toward the Parma Police Department and K9 Unit. Lucas was surprised when he saw that four of the K9 officers and their dogs attended the meeting to honor him. Two of his favorite K9, Dexter and Beny, were there to greet him with their tails wagging.

In addition to the treats Lucas brings the K9 dogs, he doesn't forget the K9 and Parma Police Department officers, who receive weekly visits and homemade goodies he bakes with his mother or treats he purchases with his own allowance. Lucas' mom said he does chores around the house to raise funds for the gifts he brings to Parma police and K9. "Lucas is our youngest Citizen of the Month and has the biggest heart," said Mayor Tim DeGeeter. "Our officers look forward to his visits." Saban was equally impressed with Lucas, who was not shy when surrounded by adults in the Parma Council Chamber. "When I gave him the proclamation, I said, 'You are the coolest little guy I have ever met.' He smiled and then replied, 'Thanks, that means a lot,'" Saban said. "He also told me he picked out his tie and vest to wear for the evening."