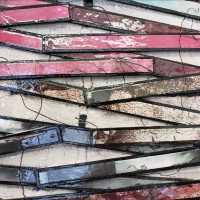 I recently had the opportunity to meet Gary G. Nass, a Parma abstract artist, and discuss with him the process he uses in creating his very unique pieces. They are a mixed media construct. His current series is an observation of the relationship between hard-edged things, such as poles, fences, buildings, etc, as represented by the wood stripping he uses, and the beauty of nature using the photographic image element of the work.

He begins with a wood board, typically plywood, in various shapes, and builds a frame behind it. The wood is then painted or stained. He attaches shaped pieces of black poster board to the wood with small nails. Homemade paper of various colors is glued to the poster board. His homemade paper is made using scrap strips of paper, water, a frame, and a screen. It’s also one of his favorite parts of the process. Strips of wood or poster board are then nailed in an arranged way, sometimes randomly, sometimes in a more geometric pattern, and often extending the borders of the piece. Nature photographs he’s taken while walking, for example, in the Metroparks, of tree bark, gravel, wood chips, leaves, and the sky are altered on the computer for color and cropping and printed onto standard copy paper and cut into strips. The photo strips are glued onto the wood strips in an appealing way and covered with epoxy resin to seal them. It’s a long, time consuming, detail-oriented process.

Gary states his interest in art goes back to his fourth-grade teacher, Mr, Schraff, who always encouraged him. He double majored in Drawing and Printmaking at the Cleveland Institute of Art and studied under Edwin Mieczkowski, Carroll Cassell, Jose Cintron, and Paulo Pelosini. He was most influenced by the late Edwin Mieczkowski, who taught him to work in a series and the importance of developing an idea and seeing it through to its conclusion. Gary also worked as his apprentice. His current work is directly related to his time spent during his apprenticeship. He also attended the University of Akron, majoring in Graphic Design.

Eventually, Gary went to work for the City of Brecksville’s Service Department and became resigned to the fact that he would continue there for 30 years, and raise a family. But he never lost sight of his goal of becoming a serious artist. Now retired, he is able to finally realize his dream and do what he loves best. On January 25, 2019, Gary’s work hung at Prama Artspace Gallery, located at 5411 Pearl Rd.

It’s my opinion that you realized your goal Gary, and here’s to many years of creating.