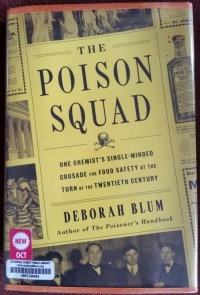 The Pure Food and Drug Act passed in 1906 due to the fervor of Harvey Wiley, chief chemist in the Department of Agriculture. He studied food products and educated the public about adulterated food. Formaldehyde was added to meat and dairy products, borax, copper sulfate, sawdust, floor sweepings etc. were added to food products. A plethora of products simply weren't what they said they were, contained toxic substances or flat out gross stuff. The book goes into shocking detail about this and the fight between manufacturer's and legislation for safe food, authentic food, and labeling such. The poison squad was a group of men that volunteered to ingest substances believed to be toxic to record the results. For decades Wiley battled for legislation to ensure authentic food and proper labeling as well as to eliminate toxic substances in food. Frustrated, he left public office to write uncensored for Good Housekeeping and eventually published, 'The History of a Crime Against the Food Law,' venting his frustrations of a corrupt government that bent to industry pressure and ignored public welfare. Despite the numerous poisonings and deaths over the years, it wasn't until over 100 people died, many were children, from a cough syrup containing diethylene glycol (found in antifreeze) that legislation greatly expanded the previous act and replaced it with the Food, Drug and Cosmetic Act of 1938. It corrected deficiencies and gave real authority to what we call the FDA, Food and Drug Administration. The mid-nineteenth century marked the beginning of Europe enacting protective measures and banning many American food products. Today, the EU, Russia and many other countries have banned Genetically Modified Organisms (GMO's). They dominate our groceries, yet are banned for sale within and import to those countries which have bans in place. Much of the American food supply is still tainted, not just with GMO's, but an abundance of chemicals, preservatives, dyes, fertilizers, fungicides and herbicides that are known to be toxic, so there is still work to done to purify our food supply.