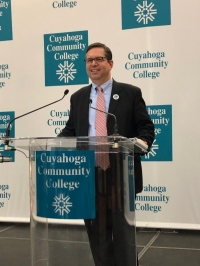 In his eighth annual State of the City speech Monday evening, Mayor Tim DeGeeter highlighted Parma’s success stories to illustrate the community’s progress. DeGeeter touted new business development, the strength of the city’s neighborhoods, the community’s reputation as a safe city and the infrastructure improvements made over the past year to about 100 people gathered in the Galleria on Cuyahoga Community College’s Western Campus. He also spotlighted the work of Parma’s council members and citywide officials, as well as local organizations and individuals. “We ought to be proud of our city, of the people who reside here and how we work together to make Parma a great place to live and work,” DeGeeter said. “Every day, we’re trying to build one success story after another in Ohio’s seventh-largest city.”

In his review of the city’s economy, DeGeeter talked about the strength of the GM Parma Metal Center, as well as the millions of dollars being invested by University Hospitals and The MetroHealth System into the community’s two hospitals. He also promoted two other companies expected to make an impact – PITT Ohio and GES-AGM.

“PITT Ohio expects to complete construction of its trucking terminal complex and will employ more than 200 people,” DeGeeter said.  “It’s our largest job-creation project in more than a decade.” Meanwhile, GES-AGM, a graphite fabrication facility, is planning to expand at its Snow Road location. “GES-AGM has 47 employees at the facility and expects to add at least another 20 with the expansion,” DeGeeter said. “And, it is investing heavily in new products and technology to grow even more.”

Beyond the city’s businesses, the mayor also focused on the millions of dollars the city has invested to fix Parma’s streets and infrastructure, including this year’s $1.5 million resurfacing of Broadview Road, as well as the excavation project at Bonnie Banks near Stormes Drive. DeGeeter also shared how Parma’s home values have rebounded in the aftermath of the Great Recession. “At our lowest point, in 2015, the median sales price was $85,000,” he said. “But our housing values have rebounded, and there is a high demand for Parma homes. Even since 2017, the median sales price is up 11.6 percent to about $120,400.”

In the speech, DeGeeter talked about Parma’s reputation as a safe city and explained that residents have played an essential role in helping police officers protect the community’s neighborhoods. He cited the example of 4-year-old Lucas Woronischtsche, who became the city’s youngest Citizen of the Month in January for his support of the police department’s K9 Unit, including providing the dogs Christmas presents. Seated in the crowd, Lucas smiled as the mayor told the audience about the youngster’s story. Behind the row of chairs, Police Officer Bobby Jackson was standing next to police K9 Dexter, Lucas’ favorite dog. The preschooler then provided the most lighthearted moment of the evening. When DeGeeter finished talking about Lucas, the mayor suggested he visit with Dexter. Lucas took him up on the offer and left his seat to play with his canine friend rather than sit through the rest of the speech. “I would’ve done the same thing,” DeGeeter quipped afterwards.