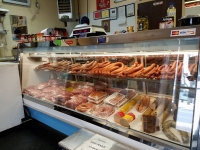 You’ve probably visited the West Side Market downtown (and if not, you definitely should), but did you know that three of the vendors have locations in Parma too? Here’s why Parma’s plentiful meat shops love serving the city and what delicious offerings you should try at each!

Thayer-Funfgeld said her father decided to open the business in Parma because it was a family-oriented city.

What sets Thayer’s Select Meats apart, according to Thayer-Funfgeld, is its quality and customer service. The shop also offers old-fashioned comfort food like stuffed cabbage, stuffed peppers, chicken pot pies, lasagnas, and more. She encourages newcomers to come in and try any of Thayer’s Select Meats’ unique homemade products.

You may have had a State Meats product without even realizing it. The shop sells to many local restaurants and delis including Sokolowski University Inn, Music Box Supper Club, Rowley Inn (next to the Christmas Story House) and more.

George Salo Jr. said what makes State Meats unique is making mostly everything in-house, such as smoking its signature kielbasa in old-fashioned smokehouses (probably why the parking lot smells so good!). The shop also serves up jumbo pierogies, stuffed cabbage, potato pancakes, German schnitzel and a variety of salads.

People line up outside of State Meats every holiday to keep their family traditions alive.

“We like that the city recognizes the diversity of ethnic backgrounds and brings the community together through local events and parades,” Salo said.

Salo encourages first-timers to come visit, promising you can sample almost anything you want. Actually, don’t be surprised if you’re greeted with a sample of kielbasa right when you walk in the door.

Pinzone’s Meats
Tony Pinzone grew up working at stands at the West Side Market, learning the trade before opening his own meat stand there in 1976. Then in 1995, he decided to open another location in Parma. The move enabled him to expand his business and seek wholesale accounts.

Pinzone likes doing business with Parma’s families, many of which live very close to the store.

“Many of these families still cook dinner, do backyard barbecues and entertain,” he said. “It is an excellent opportunity to do great business in a great area that happens to be very close to where we live and raised our family.”

Pinzone’s Meats carries just about anything you could imagine a traditional butcher shop to have, including many things you can’t find in a grocery store. Pinzone says what sets the shop apart is that most times when you walk in there is at least 75 years of experience behind the counter to answer your questions, or cut exactly what you’re looking for.

He invites new patrons to come in and try “the best Italian sausage ever made,” homemade meatballs, tender steaks, locally-raised pork and ground chuck that’s hand selected and often ground by the hour.

AC Meat Shop
AC Meat Shop is family owned and brought 44 years of experience when it opened its doors in Parma in 2010. It carries a variety of Romanian and other traditional European products like sausages.

Owner Christian Cotrau said the shop makes its products by hand in its smokehouse. Cotrau also said the people in Parma make it a great place to work, and to come in for smokies and pork cracklings!

Dionne’s Meats
Andrew Dionne grew up in Tremont and began working at the West Side Market when he was just 13. He purchased his first stand at the market in 2001 and currently owns five.

He opened a location in Parma in 2015 to better serve his restaurant accounts and suburban customers.

“With our location in Parma, we are able to serve a wide variety of customers that may not be able to make it to the West Side Market,” he said.

All of Dionne’s meats are locally sourced and antibiotic free with no fillers or hormones. Dionne said that the shop not only carries products that butchers used to offer 60 years ago but also oven-ready products that are fresh and ready to cook.

Dohar Meats
Miklos “Mike” and Angela Szucs have brought Parma’s newest butcher shop in from the West Side Market. Dohar Meats has been in business since the 40s. Angela started working at her father’s market stand at age 13, and the two are happy to keep the business family owned.

“Working on the market over the years, we knew most of our customers come from the suburbs, including Parma,” Miklos said. “We already have a friendly relationship with many of our neighbors and we think we are in the right neighborhood.”

Dohar specializes in cured-smoked meats, made on a weekly basis to avoid using extra preservatives. It also carries fresh pork, beef, and lamb.