Three Women Keep It 100 In Parma 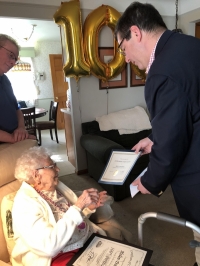 Three Parma women celebrated three-figure birthdays in February. What’s the secret to their longevity? Can it be attributed to delicious paczkis and pierogies? Is it because they live in safe neighborhoods with easy access to quality health care? Or, maybe it is because Parma is one of the best cities for retirees, according to Forbes magazine.  Whatever the reason, these women have lived through 17 U.S. presidential administrations, five wars, the Cold War, the Great Depression, moon landings, the Great Recession and numerous other historical moments. To recognize their special birthdays, all three received visits from elected city officials.

On Feb. 17, DeGeeter and Ward 4 Councilwoman Kristin Saban went to Mildred’s home to present her with proclamations. Mildred turned 101 on Feb. 12 and still resides in the same Parma home where she has lived for more than 70 years.

After the pianist led the room in a rendition of the traditional birthday song, he handed over the microphone to Jeannette. “God bless you all with sweetest blessings,” she said to her guests. “Thank you for coming and for all the things that you are wishing me. I wish the same someday for you.”

Reflecting on the three centenarians, DeGeeter said, “Maybe we should change the city slogan to: “If you want to live to 100, move to Parma.”