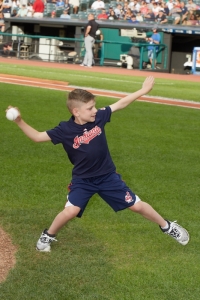 Parma residents are invited to watch the Cleveland Indians take on the Detroit Tigers at 7:05 p.m., Tuesday, July 16 for Parma Night at Progressive Field. There will be a pre-game parade on the Indians’ field, open to all Parma children and coaches involved in Parma recreation sports who attend the game. Perhaps the most exciting opportunity for those attending is the Mayor’s First Pitch Raffle. Following his own tradition, Mayor Tim DeGeeter is forfeiting his opportunity to throw out the first pitch. Instead, he holds a yearly raffle for a child to throw out his pitch. This once-in-a-lifetime opportunity is open to children who are Parma residents ages 17 or younger and who have purchased tickets in advance. The drawing occurs after tickets are sold out or returned to the Indians, which is typically about a week before the game. Tickets will soon be available for purchase from 8:30 a.m. to 4:30 p.m., Monday through Friday at the Parma Recreation Department, 7335 Ridge Road. Tickets are $26 each in the family deck section.