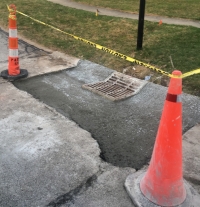 The City of Parma will invest about $500,000 to replace around 150 catch basins throughout neighborhoods this year.

The City is repairing catch basins, improving large stormwater detention areas and rebuilding water mains as it continues to upgrade the city’s infrastructure. This year, the city will invest about $500,000 to replace around 150 catch basins throughout neighborhoods after restoring 117 of them along its major thoroughfares last year. “These are important improvements that will rebuild our infrastructure and help with our stormwater management and flooding issues within the city,” Parma Mayor Tim DeGeeter said. “This is a major priority for us.”

Parma has more than 5,000 catch basins. “We have taken a fiscally responsible approach to rebuilding our catch basins. Every year, we work on these projects as our infrastructure ages,” Parma Service Director Brian Higgins said. In addition, the city is improving the capacity of large basins. For example, the city partnered with Northeast Ohio Regional Sewer District to maintain the Bonnie Banks Detention Basin near Stormes Drive. After taking over management of the basin, the sewer district last fall began a $634,000 excavation project to improve Bonnie Banks. “By systematically attacking infrastructure projects such as this – or the $2 million Chevrolet Detention Basin project – we are confronting long-term challenges and turning them into successes,” DeGeeter said.

In addition, the city will receive $2.8 million from the Cleveland Water Department to replace water mains, some more than 100 years old, on Grantwood, Fortune and Brookdale avenues. The projects could start as early as next year. As part of Cleveland’s Suburban Main Renewal Program, Parma will apply for funding twice a year for additional investment in the city’s water mains, DeGeeter explained. “While we have put an emphasis on fixing our roads, it is also essential that we rebuild our aging water infrastructure upon which our residents and businesses rely,” DeGeeter said. “This is a proactive approach. We need to fix problems now before they become larger challenges later.”