Dempsey Sarapa Serves It Up At Parma Heights' Favorite Spot, The Club House 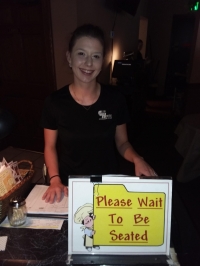 Dempsey Sarapa behind the hostess desk at The Club House.

It’s easy to see that Dempsey Sarapa loves what she does. Maybe it’s the ever-present mega-watt smile that never seems to leave her face, no matter how busy she is. Or maybe it’s simply that she loves her work. Sarapa, 27, is a server and bartender at one of Parma Heights’ most popular restaurants, The Club House, located at the corner of Pearl Road and Kingsdale Boulevard. She’s been there for 13 years, having started at age 14. Her grandmother, Bobbi Peschock, owns the restaurant and bar. The bar opened in 1988, and the restaurant in 1995. The Club House is known for its chicken paprikash.

That’s understatement, to say the least. According to Sarapa, she has customers that come from as far away as Georgia, Florida and California, expressly for that popular dish. “They bring containers with them when they visit to take it home with them,” she said.

A graduate of Midpark High School and Cleveland State University with an undergraduate degree in psychology, Sarapa is what most people would describe as a “people person."  “I like the communication. You meet a lot of different types of people as a bartender and server. I like that I have the chance to get to know people. Meals are very intimate for people.” She said more than 50-percent of The Club House customers are “regulars.” It’s a neighborhood thing. “I think we have very loyal customers,” Sarapa said.  “They are our family.”

Bobbi Peshock not only runs the business, but prints all the menus and bakes many of the desserts at home. So what’s Sarapa’s favorite dish? Surprisingly, it’s not the paprikash, although she said she likes it very much.  Her favorites are the Lobster Bisque, made with sherry, and “Pasta from Heaven,” a menu item that you can customize by picking your favorite pasta and style of sauce. The number one choice for her isn’t on the menu any longer.  “Steak Diane,” a combination of fettuccini with steak, tomatoes and sherry. That was her go to food. She’s one of about 30 employees at the restaurant/bar, and one of six servers. She loves to garden with her significant other, Brian Cuglewski, who works for First Energy Corp. as a process writer. She also loves to travel, having just returned from a few days in Myrtle Beach, SC. A Brook Park native, she now lives in Parma.

Her parents are Sherrie Belsito and David Sarapa, and she has two brothers, Corbin and Jake. Rounding out her family are her cats, Toby, an orange tabby, and Penelope, a full breed Russian Blue. Both are rescue cats.

Sarapa says to be a good server, you have to be a multi-tasker. “Time management is really important.” She adds it is important to smile, be engaging and have a genuine personality. “I want to treat people the way I want to be treated,” she said.  “At the same time, you have to be yourself.”

SPOTTED AT THE CLUB HOUSE IN PARMA HEIGHTS – Former Parma Hospital (now University Hospitals Parma Medical Center) Nurse and administrator Gail Swiger and husband, Bill, having a leisurely dinner.  The Swiger’s maintain a home in North Royalton, but Gail Swiger reports they spend most of their time traveling the country in a recreational vehicle. Since her retirement in 2012, Swiger says they’ve logged over 140,000 miles of travel. Their next destination?  Northern California, where their son is moving, having been working out of the country for several years.

A LONG-TIMER – Did you know that former city council member, police officer and city safety director Richard Rob was recently recognized by the Parma Heights Historical Society for being the longest Parma Heights resident in the community? Rob has resided in our town for 70 years. He lives on Greenbriar Drive.

A NEW ROLE – Colleen Corrigan Day has left her position as Director of Annual Giving and Alumni Relations at Holy Name High School in Parma Heights and is now the Director of Mission Support and Donor Relations at Regina Health Center in Richfield. Her husband, of course, is Parma City Auditor Brian Day.

ON STAGE AT THE CASSIDY THEATRE – Coming up August 16 – September 1 is Lend Me A Tenor, by Ken Ludwig.  Here’s a bit about the storyline.

On a very important night for the Cleveland Grand Opera Company, Tito Mirelli, world-famous Italian tenor, is set to perform the starring role in Otello. Henry Saunders - General Manager of the company - is beyond stressed and insists that his assistant, Max - a nervous, young fellow and secret tenor extraordinaire - watch over Tito’s every move to ensure smooth sailing. After a huge fight with his wife Maria, Tito is left unconscious – leaving Max to step in. Throw in Diana, an ambitious, female co-star; Maggie, Max’s giddy girlfriend; Julia, head of the opera guild; and a bellhop fighting for Tito’s attention, you have a recipe for comedic disaster. Max navigates the company through one catastrophe after the next and, together, Max and Saunders find a way to save the Opera Company’s big night.

This woodwind ensemble will present classical music while telling a personal immigration story.

FREE PRODUCE – Working in concert with the Parma Heights Food Pantry, the city will sponsor a free produce give-a-way on Saturday, July 6 from 9 a.m. to Noon, or while supplies last.  Please bring your own bags.

KIDS IN THE COMMONS AND THE BIG CREEK HANDMADE FEST – The fourth annual “Kids in the Commons” event will be held from Noon to 5 p.m. Saturday, August 10 in the Greenbrier Commons.

A live D.J. will be poolside, and there will be free exercise demonstrations by YMCA staff members from the North Royalton Family YMCA.  The Parma Heights Library will have family-friendly activities both inside and out.

In addition, there will be crafts, balloon twisting, face painting, bubblepalooza, Disney princesses, a caricaturist and more.

New this year on the same date and during the same timeframe is the Big Creek Handmade Fest.

The city is partnering with the locally-owned Avant-Garde Art and Craft Show line, a marketplace of handmade pieces by local artisans and crafters.  The Handmade Fest also will feature the Greenbrier Art League with showcase artist Will Sanchez, named by Cleveland magazine as one of 2019’s “Most Interesting People.”

Food trucks will be on hand if you wish to purchase refreshments.

WANT TO SEE YOUR INFORMATION FEATURED IN THIS COLUMN?  E-mail items to Rick Haase at rick.haase@sbcglobal.net.