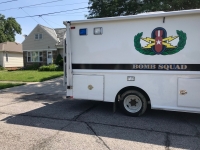 On Friday, June 28, 2019, the Parma Police Department, along with ATF special agents, and investigators from the State Fire Marshall’s Office, and the Southwest Enforcement Bureau (SEB) Bomb Unit, arrested the son of a local father and son duo for manufacturing and selling large quantities of homemade explosive devices. The father was later charged in Parma Municipal Court.

Charges have been filed against the following individuals:

On June 28, 2019, at around 10:30 AM police simultaneously executed two search warrants, one at each of the defendant’s homes. During a search of the homes, police recovered nearly 200 homemade explosive devices, some of which are commonly referred to as “H-100s,” as well as larger devices from the home on Keltonshire Road. The explosive devices range between 3.5” to 6” in length with an increased explosion expectancy as the size increases. Police seized explosive materials, chemicals, cardboard cylinders, tools, glues, and fuses from the residence. Police believe the home on Keltonshire served as the primary location where these devices were made, and then later sold out of the home on Bradley Avenue.

This case is ongoing and additional charges may be filed later.