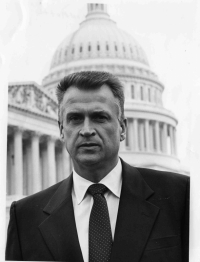 Take a moment to contemplate who the most influential resident has been in Parma’s history. Maybe some famous folks who called Parma home come to mind like John D. Rockefeller who lived here for a short time, Ettore Boiardi (A.K.A. Chef Boy-Ar-Dee) who lived here later in life and died here, or astronauts Jim Lovell or Michael Good who also lived here for a time. Certainly, they all made their marks on our nation, but they’ve got nothing on the subject of my column this month - a man who lived much of his life here, served in so many different capacities, and has had such an impact on our community. That man is Ronald M. Mottl.

Truth be told, I have wanted to write this column for many months, but there is so much to say about Mr. Mottl that I knew it would not be easy. Further, because there is so much to say, the editor has asked that I continue the column next month. Born on the east side, Mr. Mottl’s father died when he was only 11 years old.  Later, his mother remarried and the family moved to Parma. The young Mottl attended Parma Senior High School and built an unrivaled record of academics and athleticism – being named all-scholastic in basketball, receiving the Cleveland Touchdown Club’s Most Valuable Player award, as well as pitching a no-hitter and four one-hitters.

Following high school, Mr. Mottl accepted a baseball scholarship from the University of Notre Dame, where he served as captain of the 1955 team. Further, in just 5 ½ years he managed to earn both his bachelor’s and law degrees. He then served in the U.S. Army and U.S. Army Reserves for 6 years.

In 1958 Mr. Mottl was appointed to his first public service position, serving as assistant law director for the city of Cleveland under Mayor Anthony Celebrezze. Two years later he won his first elected office and served as councilman for ward two of Parma (the position I held from 2004-2011). He then went on to serve as President of Parma City Council from 1961 to 1966 (the position I have held since 2011). One of his biggest accomplishments as President of Council was successfully fighting a Columbia Gas rate increase, which saved Parma residents millions.

Council President Mottl’s hard work catapulted him to the Ohio House of Representatives in 1967-68, then onto the Ohio Senate in 1969.  It was in the Senate where he made one his biggest marks. A Democrat in a Republican-dominated chamber, Senator Mottl knew he had his work cut out for him, as it is always very difficult for a member of the minority party to achieve any legislative accomplishments. However, despite the odds, he had a dream of supplementing the state’s funding of public education with the creation of an Ohio lottery.

Senator Mottl’s first lottery bill narrowly passed both chambers of the Ohio General Assembly, but was struck down by the courts following a challenge by the Council of Churches. Not giving up, he reintroduced the bill and it passed both houses without one vote to spare in each house. It was then placed on the statewide ballot and was passed by Ohio voters in 1973. Therefore, it is appropriate to call Mottl the father of the Ohio Lottery. Since its inception, the Ohio Lottery has raised over $27 billion for schools. Relatedly, he fought hard to bring the lottery headquarters to Cleveland, where it remains and has translated into hundreds of jobs for northeast Ohio.

While in Columbus, Mottl also authored legislation to reform Blue Cross rates and regulations and strengthen penalties concerning sawed-off shotguns. Further, he supported legislation that strengthened the oversight powers of the Public Utilities Commission of Ohio (PUCO), prevented the Ohio Department of Transportation (ODOT) from spraying roadsides with carcinogenic chemicals, prohibited the Director of the Department of Natural Resources from charging for the use of state parks, among many other important bills.

Stay tuned next month to find out more about Mr. Mottl’s years of service since serving our community in Columbus.  Best wishes to you for a blessed Independence Day. Take some time to read our nation’s birth certificate: The Declaration of Independence. It’s a very fascinating and important read.