Yang 2020 And The War On Normal People 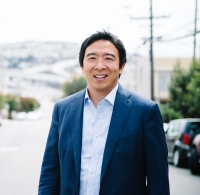 Maybe you've seen them on your Facebook news feed or heard about them from a friend. Local Yang Gang chapters are already cropping up all over the country, which include the Cleveland, OH Yang Gang, Parma, OH Yang Gang, and other nearby chapters.

Recently, I had an opportunity to meet up at Tremont's Civilization café with fellow members of the Cleveland, OH Yang Gang, who support 2020 Democratic presidential candidate Andrew Yang. At the meeting, the Cleveland, OH Yang Gang, whose members span the political spectrum, engaged in an energetic discussion about Yang's policies, the looming threat of artificial intelligence (AI) and automation, the best ways to best promote his many ideas, and upcoming events to raise awareness about his candidacy to potential voters.

In a crowded field of two dozen Democratic presidential candidates, Yang, founder and CEO of Venture for America and author of The War on Normal People, seems to have distinguished himself in a way few other candidates have. Yang describes himself as the opposite of Donald Trump - an Asian man who likes math - and proposes as his flagship policy a Universal Basic Income (UBI) of $1,000 per month, $12,000 a year for every American adult over the age of 18. As it turns out, UBI is very much an American idea and, in one form or another, has found advocates over the years in the likes of Thomas Paine, Richard Nixon, Milton Friedman, Martin Luther King, Jr., as well as Elon Musk, Mark Zuckerberg, Hillary Clinton, and Barack Obama.

In a recent interview with MIT Technology Review, Yang explained his focus on UBI, also known as The Freedom Dividend, as such: "The reason why I’m focused on this issue is I’m convinced it’s driving the social, economic, and political dysfunction we are seeing. The reason why Donald Trump is our president today is we automated away 4 million manufacturing jobs in Michigan, Ohio, Pennsylvania, Wisconsin, Missouri, and Iowa, all the swing states he needed to win and did win. And everyone who works in technology knows full well we are about to do the same to millions of retail workers, call center workers, fast food workers, truck drivers, and on and on throughout the economy." In addition to his appearances on CNN, MSNBC, and Fox News, Yang has also been interviewed on The Daily Show with Trevor Noah, Real Time with Bill Maher, The Rubin Report, and The Ben Shapiro Show. Yang's interview on the Joe Rogan YouTube show, drawing over 3 million views, appears to have propelled his candidacy into even greater relevance and has further boosted his name recognition.

While some critics have attempted to equate UBI with socialism, Yang does not see it that way. He recently tweeted, "Some confuse Universal Basic Income with socialism. Socialism is when you nationalize the means of production. UBI is capitalism where income does not start at zero. Rather than spend tax income on bureaucracy it is given directly to people."

Unlike our existing welfare programs, UBI would be simpler and more straightforward. Under Yang's proposal, while there may be some trade-offs when electing UBI, studies have shown that a UBI policy would likely have a positive effect on economic growth. One such study, conducted by the Roosevelt Institute, examined the macroeconomic effect of three UBI plans offering different cash amounts. All three plans produced increased spending power for lower-income Americans. The most generous of the three UBI plans studied ($1,000 per month), revealed that UBI could potentially grow the economy by $2.5 trillion.

Local Yang Gang members have found Yang's embrace of UBI to be very appealing. Madeleine Zimmermann of the Cleveland, OH Yang Gang says, "Yang's policies, particularly UBI, couldn't be any more relevant for a community like Cleveland. The city has an economically resilient history, and a policy like UBI would provide the fuel to magnify the impact of the persistence, creativity, and pride already present in our community."

But Yang's candidacy goes well beyond UBI. Whereas many other Democratic candidates have vaguely indicated what policies they may support, Yang already has over 100 policies identified on his campaign website, Yang2020.com. According to the Democratic Leadership in Iowa, “Mr. Yang has the most detailed and comprehensive set of policy proposals we have ever seen at this stage in the campaign.” Yang's three big policies are UBI, Medicare For All, and Human-Centered Capitalism. Other policies include making Election Day a holiday, recognizing data as a property right, expanding access to medical experts, implementing modern time banking, initiating a robo-calling text line to address unwanted calls, and regulating AI and other emerging technologies.

With so many other politicians seemingly stuck in the past offering 20th century solutions for today's problems, Yang's candidacy appears to offer a forward-thinking 21st century approach to bridging the current political divide and the toxic climate of distrust such divisiveness has fostered. In fact, when discussing his candidacy and solutions he proposes, Yang regularly emphasizes that "It’s not Left or Right, it’s Forward." This has become one of Yang's main campaign themes, along with "Humanity First." His willingness to engage in meaningful discussions with both sides of the political spectrum, talk through his proposals, and offer bipartisan solutions goes beyond the empty platitudes typically encountered at this stage of the presidential race. But the question remains: Will Yang be able to persuade enough voters that he is the best candidate to take on President Trump in 2020?

The Democratic National Committee (DNC) has scheduled a total of 12 debates. The next nationally televised debate is slated for July 30 and July 31 in Detroit, MI, which will be aired on CNN.

Stefan P. Stefaniuk has been a Parma, Ohio resident since 1982 and enjoyed growing up in Parma's incredible historic downtown neighborhood. After serving five years in the U.S. Navy, he was honorably discharged in 2009 and returned to Parma, where he now resides with his wife and four children.