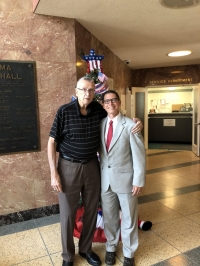 Last month I commenced a two-issue column about one of Parma’s most notable residents – Ronald M. Mottl.  Following years of distinguished elected service on Parma City Council and in the Statehouse in Columbus, the voters rewarded Mr. Mottl’s hard work in 1975 by sending him to Washington, D.C. to serve in the U.S. House of Representatives. In fact, he served for eight years in the nation’s capital.

While in Congress, Representative Mottl made a name for himself as a fiscally responsible Democrat. In fact, throughout his career, he sought creative methods to pay for government services without utilizing taxpayer dollars.  For instance, Mottl discovered that billions of dollars in short-term federal government deposits of social security and income taxes placed in banks were not accruing interest. As a result of his investigation, he led the effort to begin requiring banks to pay the U.S. Treasury interest on these deposits. In fact, he estimated that approximately $265 million was being left on the table annually from this seeming oversight. According to estimates, the federal government has collected over $15 billion since the requirement was implemented.

Mottl’s list of accomplishments in Washington for his district back here is truly commendable. For instance, he spearheaded efforts to ensure that abandoned salt mines under Lake Erie would never be used as storage facilities for nuclear waste. He also worked hard to save NASA Lewis Research Center (now NASA Glenn) and its 3,000 jobs.  Further, he fought to prevent the weakening of clean air laws, among many other accomplishments.

Mottl’s service to the community did not stop after coming home from Washington. In fact, he served as President of the Board of Education for the Parma City Schools in 1986. While there, his crucial vote was the one that kept Normandy High School from closing. Frustrated with how schools are funded in Ohio, he again ran for and won a seat in the Ohio House of Representatives in 1987. While there he fought to ensure adequate funding for our local schools and schools throughout the state. In fact, he led the effort to place an amendment on the statewide ballot to ensure that all lottery funds would be required to be allocated for education in the state. The measure was subsequently passed overwhelmingly by Ohio’s voters.

As an educator myself, I appreciate and can attest that education for all is very important to Congressman Mottl. From experience, he learned the importance of a good education. He fought hard his entire career to ensure that every child in Parma and throughout Ohio received a fair and equitable education, as mandated by our state constitution. No one can argue that he did not just talk the talk, but walked the walk, as his efforts continue to result in tangible gains for Ohio students.

While in Columbus for his second stint, he did not rest on his laurels.  In fact, he worked with his colleagues to accomplish the following and more while there:

*designating I-77 as the “Vietnam Veterans of America Highway”

*procured $100,000 from Columbus to renovate the Byers Field press box

Congressman Mottl has proudly practiced law for over 58 years. In fact, after leaving Congress he was a partner with longtime Parma Heights Mayor Paul Cassidy at the firm Cassidy and Mottl. He currently practices at Ron Mottl and Associates located at 6650 Pearl Road, Parma Heights. He may be contacted at 216-990-2217.

Today Congressman Mottl lives in North Royalton with his wife Debra. His four children are Ronald, Jr., Ronda, Ron Michael (Mickey), and Amanda Leigh. Truth be told, no one person in Parma’s history has served our community in more capacities than Mr. Mottl and for all of that service, including 33 years in elected office, we all owe him our thanks.