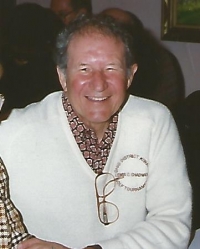 Many of you may remember Dan Mihuta who retired from the Parma City Schools in 1978 after 31 years teaching art education. Or you may remember watching his televised art instruction classes, titled, Art Chest, Art Maker and Return of the Art Maker on WVIZ and other PBS stations.

In 1964 he and other teachers were approached by then-Superintendent Paul Briggs to study the use of television in the classroom. As a result, Parma became the first school system in the U.S. to receive its broadcasting license. The first studio was located at the board office. When construction was completed at Normandy High School it housed a television studio/station. These televised classes were in language, math and science. Dan Mihuta did all the artwork for those programs and had vocational students working with him. One day due to a snow storm the regularly scheduled televised class could not go on air. Dan Mihuta went on air instead wth an art program. Several people called and wanted more art classes. It was a success.

In 1979 he went to work for Western Instructional TV where he became “The Art Maker”. He launched his on-camera career in 1980. His fame grew and his programs were seen all over the U.S., Canada, Mexico, Hong Kong, Singapore, Africa and more. You can view some of his televised classes on YouTube, or lessons can be ordered on Amazon.

At the August meeting of Parma Area Fine Arts Council, we pulled out the old photo album and found several photos of Dan. One of the long time members remembered that Dan would sing and perform with his Barber Shop Quartet at several of the Parma Fine Art functions. He was remembered as a warm friendly person. She fondly remembered his lesson using string and glue with paint.  The obituary was also posted to several art related Facebook pages. Many children grew up to appreciate and love the art of creating thanks to his instruction. One local artist stated that growing up Dan Mihuta was her art idol and taught her the basic fundamentals. She truly enjoyed his simple and fun colored crayon art, sketches and creativity.

Thank you Dan Mihuta for being the children’s Bob Ross.