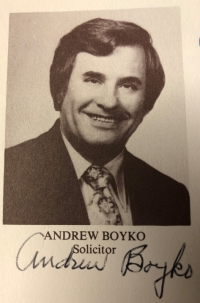 The City of Parma Scholarship is named in honor of Andrew Boyko who served Parma with distinction for over 30 years in several public offices.

Some of you who have read this column and followed me over the years may recall my story of growing up. My dad left us when I was around nine years old. As a result, my single mother – God rest her blessed soul - lost the house and worked at May Company for slave wages and struggled to raise my sister and me. So, when it came time for me to go to college, luckily I was awarded some academic scholarships and was eligible for financial need scholarships, as well, including the federal Pell Grant. Let’s just say that I would not be where I am today without the help of Uncle Sam (U.S.) and other generous folks when things were rough.

When I joined Parma City Council back in 2004, I soon met with Law Director Timothy Dobeck and, then mayor, Dean DePiero to assist me with putting together a non-profit to provide scholarships to Parma students wishing to attend college. As a result, the City of Parma Andrew Boyko Scholarship Fund was born.  A 501(c)3 non-profit organization (not funded with any taxpayer dollars), it has so far given out well over $100,000 among nearly 50 students.

The Foundation honors the service of Andrew Boyko, who served the City of Parma for over 30 years as municipal judge, law director and in many other capacities. Judge Boyko was a Parma resident whose accomplishments stand testament to the importance of education in one’s life. Many public officials, residents, and businesses have given generously to make the scholarships available.

The Scholarship Fund is intended to provide financial assistance to high school seniors from the City of Parma wishing to pursue post-secondary education. In a blind fashion, a scholarship selection committee made up of members of the community take into consideration each applicant’s financial need, special circumstances, character, scholastic record, involvement in community service, and commitment to the City of Parma. One of the scholarships is designated for the applicant exhibiting an exceptional commitment to community service.

The Foundation will award a total of $7,500 in scholarships in 2020. The Selection Committee will award three to five scholarships, with a minimum award of $1,500 for each scholarship. To be eligible for the scholarship one must be a resident of the City of Parma, a United States Citizen, and a high school senior or equivalent.

The hope of the Board of Trustees is to raise enough funds to sustain the organization well into the future. Therefore, we have planned a fundraiser on Tuesday, September 24 at the Cleveland Metroparks West Creek Reservation in the Watershed Stewardship Center from 4:30 to 7:00 pm.  Our keynote speaker will be Brian Zimmerman, CEO of the Cleveland Metroparks. Hors D’oeuvres, beer, and wine will be served at the most beautiful venue in Parma. If you would like to come to the event, would like to donate, are interested in including the Scholarship Fund in your will, or you are a student wishing more information or an application please feel free to contact me at (440) 885-8091 or email me at councilmanbrennan@msn.com.

On a side note, please contact U.S. Representatives Anthony Gonzalez and Marcy Kaptur, as well as U.S. Senators Sherrod Brown and Rob Portman to encourage them to support legislation that helps kids afford college - it’s a good investment in our city’s, county’s, state’s and nation’s future.