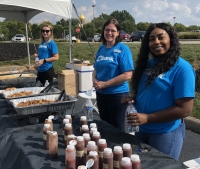 U.S. Bank opened a new branch in the former Eat’n Park building at 2075 Snow Road. In April, U.S. Bank closed its nearby branch at 5659 Broadview Road so it could double its space at the new Snow Road location, which has 3,600 square feet. U.S. Bank senior executives said the new branch also offers customers more convenience with services such as wealth management, business banking and home mortgage loans all located in one branch. One feature the new branch offers that Branch Manager Sabrina Hinton takes great pride in highlighting is the conference room. "Any community or nonprofit group can use our conference room," Hinton said.

On Sept. 21, the branch held a grand opening party. The unseasonably hot day did not deter the crowd that enjoyed food and beverages, giveaways and a free live concert from the local cover band, The Spazmatics. Parma police and fire departments took part in the bank’s Touch-a-Truck portion of the celebration, which attracted many families with young children.

Mission BBQ provided food and beverages at both events.

"We're pleased U.S. Bank and their employees are staying in Parma," DeGeeter said. "Having a major American bank repurpose this former restaurant for a branch has a positive impact on our local economy. Ward 9 Councilman Roy Jech and I are both thankful for U.S. Bank's continued investment in Parma".