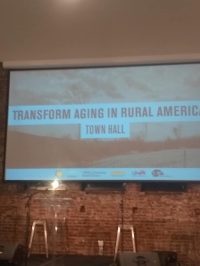 On November 20th my son Bill and I traveled to Pittsburgh to meet Jay Allen where we witnessed a very special performance of his song Blank Stares. Jay had been watching his mother fight her battle with Early-Onset Alzheimer's  for the last 5 years seeing her memory and her personality continue to slip away. Sadly at the young age of 55 she lost that battle this past February. Jay wrote Blank Stares to honor his mother and to share some of the pain that families and Care Partners face. The video of Jay singing this song with his mother on stage has been viewed Millions of times around the world. His performance at the Transform Aging Town Hall was more a Prayer than a song and it touched me on a personal level. I applaud his courage as he continues to perform this tribute because I felt his sadness and realized that it must break his heart every time he does. I know it broke mine.

As an Advocate/Activist for people living with Dementia my knowledge and understanding cannot compare with the personal experience of people like Jay or the millions of Care Partners the world over that are playing a vital role in the lives of their loved ones who are fighting this battle. God Bless all of them. The opportunity to meet Jay was made possible by the Clearfield County Area Agency on Aging.CCAAA Director Kathryn Gillespie teamed up with Dr. Bill Thomas founder of Changing Aging and designer of MINKA  Age / Dementia Friendly housing units in order to create the Village of Hope. I will be inter-acting with them and closely following their progress. Dr. Thomas and I have been friends since I became part of the Alive Inside Foundation. It was good to have the chance to see him again and also to make a connection with Kathryn.I know that given the prospect of addressing the needs of a growing Aging population our Tri-City area of Parma,Parma Heights and Seven Hills could definitely benefit from a project such as this ideally as part of the Westcreek Conservancy project to Re-Purpose Parmadale. That is an idea I plan to present to the Mayors and Administrations of all 3 cities and the West Creek people as well.
Stay Tuned
Blessed Holidays to All

I am the C.E.O. of Worldstock Entertainment