Paramedic Looks Out For His Neighbors 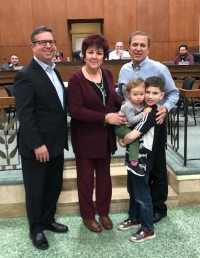 Dennis Gerlich's grandchildren join him for a photo in the council chamber with Parma Mayor Tim DeGeeter and Councilwoman Debbie Lime.

Ward 2 Councilwoman Debbie Lime and Parma Mayor Tim DeGeeter recognized Dennis Gerlich as Citizen of the Month at a January council meeting. Lime nominated Gerlich because she said he is always looking out for his neighbors.

In 2019, Gerlich trimmed street curb weeds in his neighborhood on Dorothy Avenue, starting from Ridge Road and ending at Chestnut Hills Drive, which added up to nearly 100 lawns. He then painted the faded street addresses along the curb at each home to make it easier for emergency workers to find addresses at night. A current paramedic with Physicians Ambulance, Gerlich said he knows firsthand how much easier it is to find a house address at night if it appears on the curb.

"Several of his neighbors didn't realize Dennis had done this work because he quietly went about the task. Dennis embodies the true spirit of a good neighbor," DeGeeter said.

For all his volunteerism throughout the years, Gerlich is a former Parma Area Chamber of Commerce Pride Award recipient.