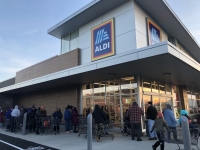 There was a big turnout for the new Aldi grocery store at Quarry Square, formerly known as Midtown Plaza. Many people withstood cold temperatures Dec. 12, lining up outside the entrance before the doors opened. The first 100 shoppers each received a gift card in the amount of $10, $25 or $100, and nearly all the shoppers were handed free reusable grocery bags and keychains. There were also food samples and a chance to win free produce for a year.