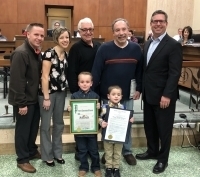 Pinzone's has been at the historic West Side Market for decades, providing the best cuts of beef and pork while creating a large and loyal customer base. In 1995, Pinzone’s expanded when it opened a butcher shop at 6046 Broadview Road, Parma and increased its product line to include poultry, seafood, deli and bakery.

Owners Tony and Nancy Pinzone have been Parma residents for 40 years. In addition to running a successful business, they also raised two children and are now proud grandparents.