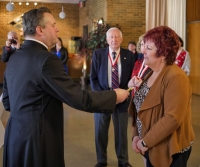 Parma Councilwoman Debbie Lime, Ward 2, Polish Village, was one of six, honored by the Polonia Foundation of Ohio, Knights and Grand Ladies, on Sunday, March 8, 2020 at a banquet held at Holy Spirit Party Center in Parma. She was awarded for her accomplishments to promote Polish culture and ideals through her commitment to support the Polish Constitution Day Parade and After Party, which takes place in Polish Village Parma annually in May. Also honored for their accomplishments were, Andrew Bajda, Jacqueline Jaros, Agnieszka Kotlarsic, Cara Florence Milcinovic, and Fr. Robert Ramser.

The Polish Constitution Day celebrates Poland’s May 3, 1791 adoption of the first constitution of its type in Europe which was a milestone in Poland’s legal history, and in the history of democracy. It was the first constitution to follow the 1788 ratification of the United States Constitution and showed notable similarities in the approach to and design of our political system. Events honoring the signing of the Polish Constitution on May 3, 1791 have been celebrated by the Polish American Congress in our area since the group formed in 1948. The parade and events surrounding the celebration originally were held in Cleveland. In 2010 the Polish American Congress began searching for a new location due to lagging attendance and community support. They finally settled on the suburb of Parma which boasts an 18% population of residents of Polish ancestry. Over the last 10 years, the Polish American Congress has worked with Councilwoman Lime, the City of Parma, and the Polish Village Parma volunteers to bring this parade and after party to the community.

The parade has been welcomed in Parma and is usually the first Parma parade of the year, occurring in early May. Unfortunately the May parade will be rescheduled to later in the year due to our current health crisis. In addition to the parade, and who does’t love a parade, the after party offers a celebration of the sights, sounds and smells of Poland, through the beautifully colored Polish costumes, the strains of a lively polka band, and the delicious pierogi, kielbasa, stuffed cabbage and pastries served at the after party. As well as the opportunity to meet your neighbors.

Congratulations to Councilwoman Lime and the five other honorees for their accomplishments!