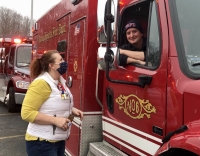 About a dozen red emergency vehicles parked in the shape of a heart, which was only recognizable from the upper-level floors of the hospital. The rest of the vehicles sprawled out in the expansive and nearly empty parking lot. After all the vehicles were in position, the fire chiefs gave the signal, and the sirens flashed and wailed nonstop for more than 10 minutes. Parma Mayor Tim DeGeeter and his family, as well as Parma Safety Director Tom Weinreich, participated in a parade of vehicles and SUVs that drove past the hospital entrance, honking their horns and waving to employees who stood outside or peered from hospital windows. Bagpipers played in the hospital vestibule.

If hospital employees weren't aware of the activity occurring in their parking lot when bright red fire and ladder trucks maneuvered into position, they were well aware when the sound-and-light show began. Anyone living in the hospital's vicinity might have assumed there was a major emergency in the city. Fortunately, there was no emergency, just an outpour of gratitude and shared pride.

In a message Parma Medical Center President Brian Monter sent to the Parma Fire Department that night, he wrote: "Everyone was so surprised and loved it. I so very much appreciate you doing this for our team."