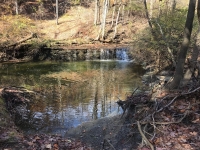 The City of Parma partners with groups such as West Creek Conservancy to protect greenspace and help manage storm-water.

Two downpours since March 29 have frayed the nerves of Parma residents and frustrated city leaders as they deal with the ongoing dilemma of regional flooding. “Fixing a city’s infrastructure requires research and money. Flooding is a complex regional issue because all the municipal sewer systems are interconnected, which means a problem in one city contributes to issues in another community. We have been working with Northeast Ohio Regional Sewer District (NEORSD) and West Creek Conservancy to find solutions,” said Parma Mayor Tim DeGeeter.

Meanwhile, the city continues making major infrastructure improvements to help mitigate flooding. In April, the basin at Veterans Memorial Park was drained to collect storm-water. It will remain dry until it and the basin at Anthony Zielinski Park can be modified to increase capacity.

In May, City Council approved storm-water management projects that the city’s Community Cost Share dollars will cover. The funds are tied to 25 percent of the total annual storm-water fee NEORSD collects from each community.

The biggest project is the continued repair and replacement of catch basins. Parma Service Director Brian Higgins said the city has fixed 450 of the more than 5,000 catch basins in the past three years. This year, the city will repair another 150 catch basins. Some of these basins will require a new grate and box, while others will need rebuilding. Work is expected to start in early June and finish by the end of 2020.

NEORSD funds will also be used for catch basin and headwall repairs for a $127,000 project on Lourdes Drive. “Currently, this project is in the bidding phase. Construction could start in August and be completed in fall 2020,” said Parma Assistant City Engineer Hasmukh Patel.

The Lourdes Drive project is the city’s second phase of headwall replacements, which started in 2016 after the city was awarded federal dollars to help support five projects.

The city is planning a future $600,000 project on Meadow Lane, as well as replacing two headwalls and upgrading a $100,000 storm-water basin on Hickory Hill Lane. The city is also looking at Fenway Drive, Green Acres Drive and Krueger Avenue.

In addition to partnering with the county, DeGeeter said city engineers have sought federal support to pay for storm-water management projects. “Sometimes we are denied funding. Keep in mind, we are not the only city asking for funds. Nevertheless, we keep applying. It is an ongoing project for our city engineers,” he said.

The City of Parma contracts with Cuyahoga County Department of Public Works to maintain the city’s sewer system. The city does not snake sewer lines. Residents should call Public Works at 216-443-8201, Monday through Friday, 8 a.m. to 4:30 p.m., if they want their lines checked. If needed, county workers will then jet lateral storm lines.

For more information about how Public Works collaborates with the city, visit www.cityofparma-oh.gov/en-US/Service-Dept.aspx to read Public Works annual reports for the City of Parma from 2013 to 2019.