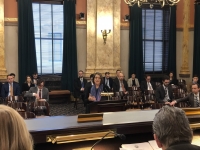 We all know that small businesses are the foundation of economic vitality in our communities and critical to our state’s financial success. Last week, I was honored to receive the Small Business Advocate of the Year Award from the Greater Cleveland Partnership (GCP) and the Council of Smaller Enterprises (COSE). Along with Lt. Governor John Husted, we received the award that honors elected officials whose initiatives have promoted the success of small businesses. This year, I was selected for the award due to my work on Senate Bill 11, the Ohio Fairness Act.

The Fairness Act works toward leveling the playing field for all because we know that our communities are stronger when everyone has a fair shot at achieving the American Dream. Earlier this year, more than 230 people testified in support of S.B. 11, during the hearings, the Bill has also received support from almost 1,000 businesses throughout the state.

In an effort to make the American Dream even more achievable, I have also been working to advance women owned businesses as we seek to find support and resources during these challenging times. While we can improve the status of small businesses through individualized purchasing power, legislation that keeps our businesses diverse and protects our workers is also vital.

As we work to re-energize our economy in the era of Covid-19, it is important to further support and lift up our small businesses as much as we can. So order take-out, purchase online for a store-front pick-up or make an appointment to visit your local hairdresser or barber­– goodness knows we can all use a visit!