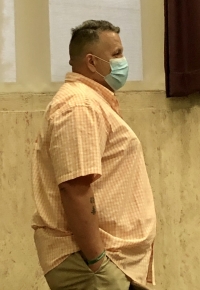 Coach Rich Caldwell listens to the reading of the resolution that highlights his achievements.

Rich Caldwell had to patiently wait for Parma City Council and the Mayor to honor him with the 2019-2020 Youth Basketball Coach of the Year. He would have received the award in early spring, but when Gov. Mike DeWine shut down Ohio, public attendance at council meetings stopped and so did recognition for outstanding coaches and citizens. Fast forward to Aug. 3, and Coach Caldwell finally got his moment during a Parma City Council Monday evening meeting. It wasn’t quite the same as it would have been back in March. Everyone was wearing masks. Council representatives and a small group of citizens, including Caldwell’s family members and some of the players he coached this past winter, were spread throughout the chamber. But for the Dartmouth Drive resident, whose eyes beamed with enthusiasm over a mask that concealed a smile, he did not seem to mind the change in protocol.

Caldwell received the recognition for being a role model to the “Rockets” 5th and 6th grade leagues he coached for the Parma Recreation Department’s Youth Basketball. He provided positive encouragement and feedback for his teams, rotated players on the court so they would learn new positions and scheduled fun team gatherings for the players and their families. He was also well organized and kept parents and players regularly informed about schedule changes.

He moved to Parma from the West Coast after meeting his wife, Stephanie. They are busy parents with four children: Tori, 24; Kyra, 15; Mason, 11; and Jared, 9. Caldwell works at GES AGM, a local graphite manufacturer that occupies the former GrafTech building.