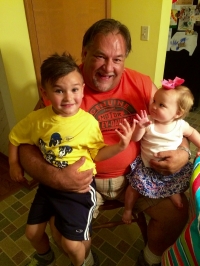 Dale Kline of Parma, pictured here with two grandchildren, is grateful his daughter acted quickly and rushed him to UH Parma Medical Center. He survived pulmonary embolisms thanks to the expertise of UH Parma's critical care specialists.

Sudden loss of energy and shortness of breath set off alarm bells for Dale Kline. The Parma man, who works extremely long days as an award-winning food salesman, was used a busy life. He spent 38 years coaching basketball, soccer and baseball in Parma. But since the pandemic hit, the 60-year-old was spending more time sedentary as the vast majority of his business with party centers, restaurants and schools stalled. He noticed that he was getting winded doing yardwork. Though he smoked two packs of cigarettes a day, he could previously complete yardwork with no problem. In mid-June, Kline went to an urgent care and learned he was on the verge of pneumonia. He returned home to recover but was feeling increasingly worse. Wracked with chills and with a grayish pallor, he was shaky on his feet and had difficulty standing and walking. On Father’s Day, his daughter insisted on bringing him to the Emergency Department at University Hospitals Parma Medical Center. His daughter’s insistence – and his physician’s expertise - saved his life.

Kline was in the early stages of shock with extensive bilateral pulmonary embolisms when he arrived in the ED. A large clot, nearly two inches in diameter, was crossing the right atrium of his heart and was headed into his right ventricle and his lungs. According to CDC statistics, one-quarter of people with pulmonary embolisms die suddenly, without ever reaching the hospital.  “If he was late even a few hours coming to the hospital, he would have been dead,” says Abdullah AlGhamdi, MD, a critical care physician who also serves as Medical Director of the Intensive Care Unit. “If that intra-cardiac clot had moved, it would have killed him.”

Dr. AlGhamdi administered clot-busting TPA intravenously. Further tests found Kline also had extensive deep vein thrombosis (DVTs) in his left lower leg too. Kline was admitted to the ICU in a critical condition with a low blood pressure. He was on 100 percent high-flow oxygen to maintain his oxygen levels within a normal range until his clots dissolved. Before discharge, Dr. AlGhamdi made Kline promise he would continue to take his blood thinner the rest of his life.  “Pulmonary embolism symptoms can be very subtle and can often be presumed to be something else,” Dr. AlGhamdi said.

Kline is grateful to have survived this medical ordeal and happy to be back to work with Sysco, where he recently celebrated 30 years as a top salesman. He has a message for anyone else who might have a pulmonary embolism lurking in their body. “If you were an active person, and due to COVID you’ve become sedentary, go get checked out,” he said.