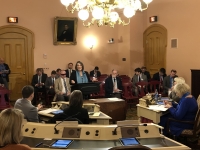 Ohioans have made substantial contributions to mitigating the effects of the Opioid crisis throughout the state. From state initiatives to community support, we have been able to save many lives. In fact, since its inception, 15,000 people have sought help from the RecoveryOhio Crisis Text Line. Despite these significant efforts, there was a disconnect in the education surrounding the life-saving antidote, naloxone.

That is why I introduced Senate Bill 59, the Naloxone without Prescription Training Bill, to require all pharmacists, technicians and pharmacy interns be trained to become knowledgeable that naloxone can be dispensed without a prescription and would also require those professionals that dispense the drug to maintain an adequate supply of it. This legislation passed unanimously out of the Senate earlier this year. It then moved over to the House where it passed out of the House Health Committee unanimously.

I am proud to announce that in September, during National Recovery Month, Governor DeWine signed House Bill 341 into law, which contained S.B. 59 as an amendment. With this law in effect, we will be able to save more lives and work towards overcoming the opioid epidemic in Ohio. The passage of this legislation is even more significant given the increased loss of life due to opioid usage this year. In August alone, Cuyahoga County witnessed at least 47 fatal cases due to heroin/fentanyl/analogs, and at least 293 victims over the course of this year. We must continue to raise awareness and pass meaningful legislation to better help our families, friends, and neighbors who are silently battling addiction.