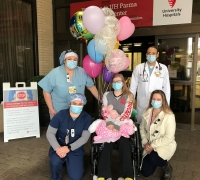 Destiny Porter's life was saved in UH Parma Medical Center's Intensive Care Unit after an attack of acute ketoacidosis, resulting from new onset diabetes, triggered a medical crisis. The episode caused a cardiac condition that required mechanical intervention, coordinated between UH Parma and Cleveland medical centers. Destiny received more than a month of acute rehabilitation at UH Parma after the condition left her paralyzed from the waist down.

Three years ago on Thanksgiving day, Destiny Faye Porter met her fiancé. This year, they will both be giving thanks that she is alive to celebrate the holiday. Two weeks before their October wedding, this otherwise healthy, 25-year-old woman had a medical crisis stemming from new onset diabetes. She went from teaching third grade, planning her wedding and preparing a new home for her and her future husband's life together to not feeling well and suddenly landing at death's doorstep.

When her fiancé, a surgical technician at UH Cleveland Medical Center, was unable to rouse her one morning, he rushed her to the Emergency Department at UH Parma Medical Center. They quickly discovered she was suffering from diabetic ketoacidosis – her body wasn't producing insulin, and her blood sugar was off the charts at over 600. She was admitted to the ICU for management.

But the ICU Medical Director Abdullah AlGhamdi, MD, felt strongly that there was more going on and immediately performed an ultrasound on her heart. Her heart was barely pumping due to severe stress-induced cardiomyopathy. Destiny was going into cardiogenic shock, a serious condition that occurs when the heart fails to pump enough blood and oxygen to the brain, kidneys, and other vital organs. They had to act quickly to prevent an imminent cardiac arrest.

Dr. AlGhamdi consulted cardiologist Paul Poommipanit, MD, and cardiac surgeon Masumi Yamamuro, MD. They all decided to initiate ECMO as a lifesaving measure since it was the only available option for her multiple organ failure. This heart-lung machine temporarily takes over pumping for the heart and requires a specific team to administer and manage.

“I knew she'd experience a cardiac arrest without mechanical support," said Dr. AlGhamdi. “A delay of even a couple hours and she would have been dead."

The ECMO team arrived within an hour, connected her to the machine and transferred her to UH Cleveland Medical Center. She suffered a cardiac arrest within an hour of arrival at main campus.

Six days later, Destiny woke up – intubated, with a feeding tube, and paralyzed from the waist down due to neuropathy. It had been a long road. She returned to UH Parma for 37 days of acute rehabilitation, learning to maneuver with a wheelchair. She is stunned by what she's been through, but happy to be alive.

“I'm an otherwise healthy 25-year-old girl, an elementary school teacher – there's no reason to think anything would be wrong," says Destiny, who's eternally grateful to her UH caregivers who looked beyond the obvious. “I can say with certainty that every single person involved in my care had a role in saving my life. There were so many people on top of their game, and being proactive. They listened, and they acted quickly.

“I'm lucky I live in Cleveland, in this area with the best medical care. I've been surrounded by such positive, lovely people. I'm so thankful for UH."

Half the battle: drive, determination, spirit

Kimberly Togliatti-Trickett, MD, Medical Director of the Acute Rehabilitation Unit, believes Destiny's story shows the strength of a comprehensive system with attentive physicians and the critical tools necessary to treat this very sick young woman, including acute rehab to help her gain confidence to return home. Destiny will continue to receive home care and outpatient physical and occupational therapy as she works to regain mobility.

“In Acute Rehab, we're taking someone critically ill and dependent on her caregivers and helping her to become self-reliant and able to manage her day-to-day activities as she continues to recover," says Dr. Togliatti-Trickett. “Her journey is not over. But half the battle is the drive, determination and spirit, and she has all those to continue to improve."

“It's been very humbling"

Destiny isn't letting her inability to walk stop her. She plans to reschedule her wedding at a later date and has a deepened love for the fiancé who has stood by her side in sickness and health, before even taking that vow.

“I'm thankful for him, and for everyone who has taken care of me. It's been very humbling. I'm so thankful for UH. I've been gifted this new opportunity at life."