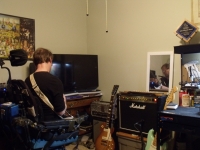 2020 has been a year filled with disappointing and hard luck news like no other. Who's ready for an inspirational and uplifting story? When he graduated from Valley Forge High School in 1989, John Allender, like many young people had a dream, and his was to play guitar, Blues guitar to be exact. Making a living was first and foremost, and John became a skilled rough- in plumber, and later a certified Risograph Digital Duplicator technician, but all the while he practiced his trade and played guitar wherever and whenever he could. By the time he lived in Florida in the early 2000's, he was established in the Fort Myers Area on his own, fronting the John Allender Band. In 2015 his band won the International Blues Competition title for South Florida, a contest started by B.B. King, with the winning bands from all over the USA competing in Memphis for a national title and the prestige that goes along with it. The John Allender Band went to Memphis, competed fiercely, but did not win the Grand Prize on their first time. Everything was going well though. Until August 13, 2016, that is.

While crossing US 41, John was struck by an automobile and was so severely injured that it actually defies logic that he lived at all. When it is said "injured from head to toe", in his case, this was no exaggeration. The amazing and heroic first responders somehow saved his life, though many would have given up at the horrific scene. After several surgeries in Florida, and even more after returning to Ohio, John was left without legs from above the knees, injuries to the spine, both arms, neck, brain, eyes, and numerous other organs. His road to recovery was a long one, filled with daily challenges that not many could withstand, no matter what level of support existed. People watched, waited, prayed, and hoped for the best to happen. Little by little, step by step, our friend John struggled through his pain, persevered, and delighted his fans with every achievement great and small. Thanks to social media, we could see the progress he was making in his recovery. Through it all he consistently promised that he would indeed play his guitar again.

Though I never doubted it, even I was pleasantly surprised to learn that on November 17, a mobile recording unit came to John Allender's home in Parma for the purpose of recording some guitar solos to be included on an album due out in April of 2021, Mike Onesko's Guitar Army. Featuring Cleveland area guitarists like Frankie Starr, Butch Armstrong, and others, John Allender joins his friends in what is truly a joyous reunion. After more than 4 years, John's recovery has progressed to this level, that he is able to pick up where he left off after this tragedy came into his life.

Even though John's recovery remains an ongoing struggle, for all of us who have endured a year full of tumultuous madness, this story should remind everyone that the human spirit is capable of so much more than we may ever imagine. If you know John already, then you are all too aware of the capacity to heal and grow back after witnessing what has happened to him. If you don't yet know John, then you really should, since all of us need to be reminded that stories like his prove that every one of us has the capacity to endure pain and extreme setbacks, yet still realize our dreams and achieve our true potential, no matter how great the obstacles placed in your path. Right here in Parma, Ohio a real miracle is taking place, and I'm so proud of my friend John, and my city as well, for cradling him during this important time of rebuilding for one of our own. Stand back, behold and rejoice.