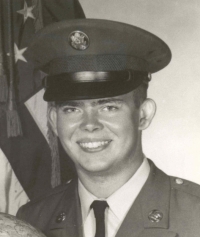 Parma has been home to many famous Americans, including the likes of John D. Rockefeller, automobile pioneer Ransom Olds, Hector “Chef Boyardee” Boiardi, astronaut James Lovell, musician Benjamin Orr, and wrestler Mike “The Miz” Mizanin, among others. This month I want you spotlight an American hero in our midst that I have found few know of, but all should be aware of. His name is Frank Herda.

Frank Herda attended Parma Senior High School, graduating in 1966. Soon after high school, at the tender age of 20, he served his country in Vietnam attaining the rank of U.S. Army Specialist Fourth Class. While serving in the 1st Battalion, 506th Infantry Regiment of the 101st Airborne Division, he became an American hero and, subsequently was awarded the Congressional Medal of Honor on June 29, 1968 – our nation’s highest award for valor. He attended a White House ceremony on May 14, 1970, where President Richard Nixon conferred the award. For accuracy, here is the full citation:

“For conspicuous gallantry and intrepidity in action at the risk of his life above and beyond the call of duty. Sp4c. Herda (then Pfc.) distinguished himself while serving as a grenadier with Company A. Company A was part of a battalion-size night defensive perimeter when a large enemy force initiated an attack on the friendly units. While other enemy elements provided diversionary fire and indirect weapons fire to the west, a sapper force of approximately 30 men armed with hand grenades and small charges attacked Company A's perimeter from the east. As the sappers were making a last, violent assault, five of them charged the position defended by Sp4c. Herda and two comrades, one of whom was wounded and lay helpless in the bottom of the foxhole. Sp4c. Herda fired at the aggressors until they were within 10 feet of his position and one of their grenades landed in the foxhole. He fired one last round from his grenade launcher, hitting one of the enemy soldiers in the head, and then, with no concern for his safety, Sp4c. Herda immediately covered the blast of the grenade with his body. The explosion wounded him grievously, but his selfless action prevented his two comrades from being seriously injured or killed and enabled the remaining defender to kill the other sappers. By his gallantry at the risk of his life in the highest traditions of the military service, Sp4c. Herda has reflected great credit on himself, his unit, and the U.S. Army.”

Following his service, Sp4c. Herda attended Cuyahoga Community College’s western campus, then served a 33-year career as a systems analyst for the U.S. Department of Defense in Cleveland.  He currently resides in Parma Heights.

2021 will mark the 53rd anniversary of Sp4c. Herda receiving the Medal of Honor. It is fitting that the community find an appropriate way to laude and show our appreciation for his service and heroism. I am currently working on this project, so stay tuned. Happy New Year! Let’s pray 2021 yields a return to normalcy.