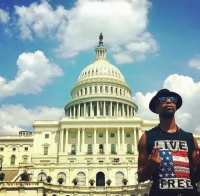 There is an age-old philosophy that has been shared across the world since the dawn of civilization, a philosophy that has intertwined its immovable truth within all spiritual belief systems - from the monotheistic Abrahamic religions of Judaism, Christianity and Islam, to those of polytheistic faiths in the practice of Hinduism and the wide array of indigenous tribal social structures upon the earth. A word that has been distilled from common generational phrases and baked into our bones; sayings like: "what goes around comes around," and, "you reap what you sow"...
A word that epitomizes balance, instilling renewal and justice to  those in its blessing, while equally exacting destruction to others in the same breath. That word is, karma, a word we have collectively accepted and understood for time immemorial, but merely in the tragically diminished context of a condition that we believe seems to only occur between people. Karma is however far more encompassing than that.

The reckoning of injustice from this spiritual vantage point is referred to as, 'karmic debt', a cardinal truth that has brought entire empires to their knees while lifting new civilizations to prominence. We acknowledge and generally accept karma happening between people, yet never stop to think of the karmic debt our nation has accrued by never truly addressing our deadly past and reconciling with it.  America and violent white nationalism has gone hand in hand since the origin of the country, it was how the nation came to carve out and dominate its way westward to the Pacific in a suppressive blood bath of indigenous carnage and misery, it was how the early American British colonies fought for and ensured the continuation of black chattel slavery [even] as England sought to outlaw the slave trade in the early 1800s, and it has been the behavior of violent white nationalist mobs since post Civil War 'Reconstruction' in particular with the advent of the Ku Klux Klan. The radical far-right has a well documented history of white nationalist insurrection and violent upheaval in our nation, and has been storming communities and capitols for centuries. No other demographic group in the country's history has ever had the capability to inflict so much harm on our fellow citizens. They've perpetrated well over 10,000 gruesome nationalist riots large and small in our country since 1743. Angry murderous far-right mobs with and without white sheets that have scourged American's homes, churches, courthouses, schools, and our nation's infamy, hell-bent on evil and values they see only for themselves. They do not believe a race war is imminent, they believe it is necessary, and will incessantly gaslight the powder keg until the first shot to bring it all to a head is finally heard once more around the world as it was in 1776.
The only difference this time, this year with the attack on our Capitol on January 6th, is that the mob upheaval didn't last long enough for it to end with humans burned alive or hanging from trees, but there's clearly yet still more to come.

A Capitol police officer died as a result of injuries sustained from the attack, but there were no MAGA blue lives matter rallies for him or any of the injured officers in the wake of the assault. The officers were spit on, pepper sprayed, beaten and crushed by those that claim to support blue lives. They attacked with pipes and an assortment of other weapons including gases, pipe bombs and guns. Over a horrendous election lie from a failed and destructive leader. A lie that former Trump appointed Attorney General William Barr, thousands of republican election officials, hundreds of republican statehouse officials, millions of republican election day overseers working alongside democrat and independent overseers who walked ballots to subsequent rooms together with the FBI, all unanimously debunked, concurred and re-concurred via election results through hand recounts. They each stated there was no fraud, and no real history of fraud in their states (which can be substantiated) - merely the periodic wear and tear of hardware and the rare inconsequential glitch that they immediately catch like with any other computer system in the world.

Yet the woefully ignorant stormed and desecrated our Capitol, left the corpse of a police officer in their wake, and continue to decry avalanches of fraud as directed by their leader, when above all, zero evidence has ever been brought forward to even republican federal judges appointed by the president, so in turn they too threw out the cases one by one due to presentation of said zero evidence. 62 cases in all... All thrown out of court by [His] appointed republican federal judges. The Supreme Court of which he appointed three judges to the bench giving it its current six republican to three democrat conservative majority, also threw out his case(s) for lack of evidence, and all of the states he demanded to recount did, and again, and again; they certified, litigated and adjudicated.
Repeatedly. Exhaustively. The Dept. of Homeland Security additionally confirmed the fair and secure fortitude of our voting systems and the strength of our states.  Yet here we are.

Election fraud is something we all truly know hasn't even been a modicum of an issue the last sixty years until a minstreling grifting madman arrived and conjured it up, stoking and stirring his many divisive cauldrons of fear and hate. Mention to his loyalists however, the very clear and open election cheating the former president initiated right in front of all of our faces with the removal of 671 massive mail sorting machines and tens of thousands of mailboxes around the country mere weeks before early voting, and you'll get nothing but quick deflections and yet another pass to his depraved tantrums and monstrosities. This abject morally bankrupt delusional hypocrisy is absolutely staggering and shamefully low of frequency, intellect, and critical thinking to the point of collective mental illness.
They listen only to their leader, not the FBI, not Homeland Security, not even former Republican presidents.
Then they prey on recruiting those we love, attempting to seduce them farther and farther away from sensibility and reality itself. They've opened the gates and have paved the way for legions of leaders to be birthed from the bowels of this madness, to emerge and grow this beast ever broader and even more ferocious. This is what happens when white nationalist evil is pampered along for centuries in a democracy that never truly existed.

But there still is hope, there are sensible conservatives that have seen this scourge for what it is and are working to regroup, even to nurture friends and loved ones away from the temptations of the radical right movement before they spiral out of control within it. It is time to come together and bury our partisan hatchets under one simple platform, the platform of endeavoring sensible noble truths that meet all of our universal human needs; a life that lends itself to earnestly seeking to understand living in the shoes of another, that we may finally begin to reduce our nation's karmic debt in the years to come, as we are only in the beginning of collective reckoning that is our karmic debt.