A Tale Of Two Cities: One Does It Better 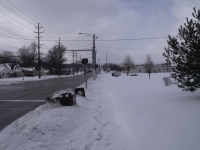 Parma side of Snow Rd. Yes, there is sidewalk somewhere under that foot of snow.

A guy like me, who can't drive and doesn't even own a car, really notices where it is safe and easy to walk and where it isn't. Since moving back to Parma I've noticed a huge difference between the Parma side of Snow Rd. and the Parma Hts. side. Only a few property owners on the Parma side clear the snow from their sidewalks, and that includes the shopping center at the corner of Chevrolet Blvd. This makes trying to walk in the neighborhood a dangerous, sometime impossible thing. Many people who have no choice, including children, take to walking in the street - even more dangerous.

Compare that to the Parma Hts. side- their city uses a machine to plow the snow off of their sidewalks, so that citizens can walk easily and safely. I've been told that Parma Hts. has been doing this as long as anyone can remember. Bottom line- it is a real pleasure to walk in Parma Hts. during the winter, and a real drag trying to do the same thing across the street in Parma. It doesn't have to be this way. Parma should consider simple quality of life issues like this when they are considering marketing the city to new residents they would do well to attract. Hearing about bike lanes coming to Parma Hts., pocket parks, etc., I have to wonder what other issues and needs Parma Hts. might be addressing better than Parma is?