We Witnessed A Miracle: COVID-19 Survivor Goes Home After 76 Days 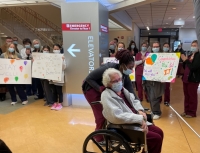 COVID-19 survivor Beverly Milano was overwhelmed by the cheers of caregivers and family celebrating her discharge from UH Parma Medical Center’s Acute Rehabilitation Center following 2 ½ months in the hospital.

Carl Milano felt like a groom on the evening of his wedding day, anticipating the homecoming of his bride of 46 years. The Mayfield Village couple had survived COVID-19: he during a three-week bout at home, and Beverly during a marathon 76 days in two hospitals, including more than three weeks on a ventilator. They had missed Christmas and New Year’s together, and on a snowy February afternoon just after Valentine’s Day, he was taking his beloved home again. “We witnessed a miracle, and you all were a part of it,” said a tearful Carl, bowing in thanks to all the assembled caregivers cheering Beverly as she was discharged from University Hospitals Parma Medical Center.

Beverly, 68, barely remembers Thanksgiving, when one of her sons came to join her and her husband for dinner, but her other children – two of whom work at UH – stayed away to avoid gatherings. She was upset initially, but she barely remembers that. When her daughter-in-law checked on her the following week, she was clearly ill and they called 9-1-1. Medics found her oxygen saturation was only 59 percent, when it should be 95 to 100 percent. Yet she was sitting up and talking, unaware. Beverly was taken to another Cleveland-area hospital, where she spent more than three weeks in the ICU. Once she was out of the ICU, she experienced some other health complications related to her kidneys and liver. When she was strong enough to leave the hospital, her family secured a spot at UH Parma’s Acute Rehabilitation Center for intensive physical and occupational therapy.

While it was on the opposite side of town from their homes, it was worth the drive, says daughter- in-law Maria Milano, a UH research nurse focusing on leukemia and lymphoma. During nearly a month of therapy, Beverly advanced from needing two to three people assisting her to stand and ambulate to getting out of bed on her final day all by herself, says Bernice Eldridge, occupational therapist. “This rehab facility is a hidden gem, I would highly recommend it,” says Maria. “Everyone was so nice. And being able to have a visitor was a deciding factor for us.”  Added Beverly, who missed the holidays with her family while isolated in the ICU: “I don’t think I would have done as good if I didn’t have any visitors. This is a wonderful place.”

UH ensured that Beverly would go home to enjoy more holidays with her family, including daughter Michelle Piper, Executive Assistant to West Market Chief Operating Officer Brian Monter, based at UH Parma. While Beverly doesn’t remember last Christmas or New Year’s Day, she’s not about to forget the past month at UH Parma. And she’s happy to be home with her husband of 46 years. “She knocked on heaven’s door twice,” Michelle says of her mother’s 76-day ordeal. “We got her back. I’m very proud to call this woman my mother, and I’m incredibly proud that our UH caregivers brought her back to health. We have so many reasons to celebrate.”