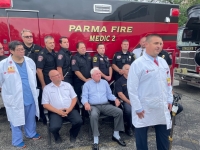 Dr. Christopher Dussel, Associate Chief Medical Officer and Chairman of Emergency Services at UH Parma, explains the chain of survival, from first responders to cardiac intervention, that saved the life of Bill Regan, seated in blue shirt. Dr. Paul Poommipanit, at left in white coat and scrubs, is Bill's cardiologist.

Bill Regan, a 79-year-old pickleball champ who has competed in national and international tournaments, knows all about collaborating for a winning result. So he was beyond grateful for the massive team effort of friends, police officers, paramedics and hospital physicians and caregivers who saved his life when he suffered a heart attack after playing his favorite pastime in Parma.

Bill suffered two heart attacks six months apart – on Nov. 9, 2020 and on May 26, 2021. Fortunately, both times he had just left the pickleball court near Ries Ice Rink in Parma, less than two miles from University Hospitals Parma Medical Center, known for its cardiac care and recently expanded cardiac surgery and cardiovascular services.

“That elephant that sat on my chest, he was BIG,” says Bill, a retired sales and marketing executive who had no symptoms of cardiac issues since the first stent was inserted in his right coronary artery in November. “This hospital is really caring for the community, and people need to know that their community hospital is working to keep everybody healthy.”

Bill had just stepped off the pickleball court when he collapsed. Two friends – Jim Gipper, a retired Cleveland firefighter, and Dave Szuter, a retired Brunswick police officer – performed the vital bystander CPR that can double or triple a person’s chance of survival. Officers Ed Pinc and Brian Paul of the Parma Police promptly responded to the 9-1-1 call, arriving ahead of EMS and using an AED they keep in their cruiser. Engine Company Two and the ambulance were close behind, and paramedics continued pre-hospital care and transported Bill to UH Parma for immediate intervention. That squad included Capt. Tom Franczak, Josh Muniak, Joe Stefanko, Anthony Hyatt and Tim Hollingshead.

Interventional Cardiologist Paul Poommipanit, MD, who performed the earlier intervention on Bill, had been anticipating seeing Bill for his six-month follow-up when his patient landed in the Cardiac Catheterization Lab as an emergent STEMI (ST-elevated myocardial infarction, a common type of heart attack) for Jamie Cohen, MD.

“We pride ourselves on the team approach between police and fire departments, and the definitive care partner of UH Parma Medical Center,” saidChief Mike Lasky of the Parma Fire Department. “Bill Regan’s story shows exactly how the system is supposed to work.”

Bill reunited with all of those first responders and doctors on July 13 at UH Parma Medical Center to thank them for their life-saving care.

“I’m so grateful for these gentlemen behind me and the work that they do,” said Regan. “They are the quiet everyday heroes that are in this community of Parma.”

TJ Martin of the Parma Fire Department emphasized the close collaboration between police and fire departments, as well as its medical provider of UH Parma. He urged everyone watching the reunion, which was livestreamed by local TV stations, to learn CPR.

"Anybody can learn CPR," Martin said. "Please take the opportunity to save a life and learn CPR."

Bill was back on the pickleball court the week after his discharge in May. With a decade of competition under his belt, he’s not about to abandon the sport that has kept his heart pumping in his senior years. Bill and his wife, Eileen, placed third in the nation at the National Senior Games in Minneapolis in 2015. The couple went on to medal in the Spanish Open and Bainbridge Cup (the first intercontinental team event in the history of the sport) in Madrid in 2017 and the Irish Open in 2019, and only slowed down when the pandemic prompted the cancellation of the 2020 tournaments.

Bill turns 80 on August 5, the same week UH Parma celebrates 60 years of serving the southwest suburbs. Now the father of five and grandfather of 13 is just hoping to find a partner to continue his competitive quest in the 80-plus set.

“When you can play in tournaments, you get kind of fussy,” he said, chuckling. “But I’m glad to be playing again.”