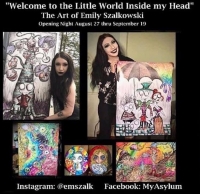 Prama Artspace Gallery & Boutique, 5411 Pearl Rd., is now showing an exhibit titled “#naming Emilys Show; The Art of Emily Szalkowski”. Emily says “Welcome to the Little World Inside my Head.” Emily’s work is a whimsical characterization of the mischievous monsters she imagines. They are sure to bring a smile to your face. This exhibit is on display until September 12th.

On September 24th, starting at 6:00 pm, Prama will be hosting the Keen Magazine Release Party. This magazine features art from underground artists. Free magazines to the first 200 attendees.

Prama Gallery owner, Sean Mabin states, “I love that the Rock and Roll Hall of Fame induction ceremonies are in Cleveland. I also love Halloween. So what's a poor boy to do?  Rock and Horror have walked hand in hand since before Screamin Jay Hawkins and Nervous Norvus. Rock and Roll Nightmare has it all!!! Rock, shock, noise, horror, it's all here.” Watch Prama’s Facebook page for details on the upcoming “Rock and Roll Nightmare.”. The show runs from October 22nd to November 21st.

Open mic Sundays returns to Prama Artspace and Gallery! This week we have the multi talented The multi talented Tim Joyce is the guest host on September 12th! If you are a poet, musician, storyteller or just want to watch come on by!

Sept le Charme, French for "7 the spell" is the brainchild of Randy Roscoe (voc). Influenced by the 19th century romantic movement and vintage b&w horror movies rather then rock, Randy sounds like no other. Sept Le Charme is poetic, goth, doomy, avante and at other times unclassifiable. The band is named after it's signature song, much like Black Sabbath or Mephisto Waltz.

Duo Decibel System will perform at our opening for "Rock and Roll Nightmare". Come early and check out the art. Then enjoy the sounds of one of Cleveland's best!

Robert Pohm, board member of Parma Area Fine Arts Council was accepted into the Ohio Watercolor Society Annual Juried Show with his painting “Dance of Love”. The exhibit ends September 3, 2021 at The Gallery at Lakeland Community College before traveling to various venues throughout the state through May 2022.

Sean Mabin, board member of Parma Area Fine Arts Council and owner/operator of Prama Artspace Gallery, photo titled “Reflective Beads” was accepted into the Walk All Over juried exhibition on display through September 18th. He is also one of over 150 artists that contributed to “Mouse House Party” an exhibit at Current located at 78th Street Studio, 1300 W. 78th Street. Artists were asked to fill the hole. The hole resembling a mouse hole.