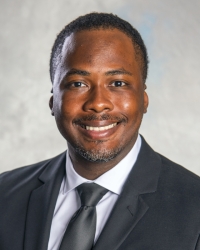 Leaders in business and medicine are the two newest members of the Board of Directors at University Hospitals Parma Medical Center.

Kareem Maine serves as Plant Director for the Parma manufacturing plant of General Motors, one of the city’s major employers. He has been responsible for quality, safety and productivity while overseeing operations for more than 1,000 employees. An engineer by training, Mr. Maine holds a bachelor’s degree in engineering from University of Detroit Mercy and a master’s degree in manufacturing operations from Kettering University. Over nearly two decades, he has held a wide range of roles at GM, from senior manufacturing engineer through various production management roles. Mr. Maine resides in Twinsburg.

Michael Debs, MD, appointed as the physician representative to the Board, is an independent primary care physician who has been an instrumental member of the medical staff at UH Parma for more than two decades. He has held numerous leadership roles, including Chairman of the Department of Medicine and 15 years overseeing the hospital’s quality initiatives. He has been the Program Director for UH Parma Medical Center’s Internal Medicine Residency Program since the hospital began training medical residents in 2015. Dr. Debs earned his medical degree from the Medical University of Sofia in Bulgaria’s capital city. He resides in Brecksville.

“We welcome the valuable addition of two new Board Members,” says Tim Boyko, Chairman of UH Parma’s Board of Directors. “Kareem brings a wealth of business and managerial experience to the Board. Dr. Debs brings leadership experience and the unique perspective as a primary care physician.”

UH Parma’s Board of Directors is comprised of members recommended for appointment by the mayors of the six communities that founded the hospital in 1961 – Parma, Parma Heights, Brooklyn, Brooklyn Heights, North Royalton and Seven Hills – as well as the mayor of Broadview Heights. The Board also includes a nurse representative and two members who are in senior leadership positions at University Hospitals.