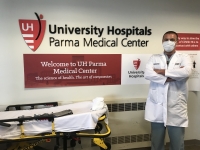 UH Parma Medical Center, where the Emergency Department is under the leadership of Dr. Christopher Dussel, has been recognized again for high-quality stroke care.

A local man who had a stroke after breakfast learned the benefit of living near a community hospital experienced in quality stroke care – and the advantage of his local hospital being connected to an academic medical center where the clot in his brain could be specially extracted before lunchtime.

“Every person involved in my care – both at UH Parma and at main campus – was just fantastic,” says Jim Kane, who climbs telephone and light poles for a living with a utility company but never expected to get a bird’s eye view of Cleveland from a medical transport helicopter.

Kane, 58, was brought to University Hospitals Parma Medical Center by North Royalton paramedics who were among the first in the region trained in telestroke, communicating with the Emergency Department before the patient’s arrival via an iPad during the advanced stroke assessment. Upon arrival at the hospital, a CT is immediately performed to rule out a hemorrhagic stroke, or bleeding in the brain. A CT angiogram of the head shows the blood vessels in the brain to identify potential occlusions. In Jim’s case, the CTA did reveal an occlusion or blockage, and he was determined to be a candidate for thrombectomy, a surgical procedure to remove clots from blood vessels that supply the brain. He was taken to UH Cleveland Medical Center – the only hospital in Ohio for the second consecutive year to receive all four of the highest awards presented by the American Heart Association in their Get With The Guidelines®-Stroke awards.

UH Parma was among 14 UH hospitals honored for its commitment to ensuring stroke patients receive the most appropriate treatment, according to nationally recognized, research-based guidelines supported by the latest scientific evidence. UH Parma won the Stroke Gold Plus and Target: Stroke Honor Roll Elite awards.

“All of our stroke teams across the UH Health System have worked together to deliver the highest quality stroke care in an integrated network that provides care close to home for residents of Northeast Ohio,” said Cathy Sila, MD, Chair of the UH Department of Neurology, and Director of the UH Comprehensive Stroke Center and UH System Stroke Program. “Stroke is an emergency, and the best outcomes occur when patients are taken to their closest stroke center to start that life-saving treatment. So it is very important to us that all of our hospitals can deliver that highest-quality stroke care. We are honored that our efforts are recognized by the American Heart Association, and that the Get With The Guidelines-Stroke provide proven knowledge and guidelines to improve outcomes for stroke patients.”

In retrospect, Kane realizes that there must have been warning signs of his stroke. A heavy smoker for nearly 25 years, he quit six years ago and has been working on improving his health. He learned that the atrial fibrillation he didn’t know he had put him at higher risk for stroke.

“I’ve always been of the mindset that I don’t have anything wrong with me until I go to the doctor and he tells me I do, and I think a lot of people think that way,” says Kane who underwent a cardioversion procedure in the weeks after his stroke to help resolve his afib. “Now I feel better than I have in a long time. I don’t need to suffer getting older, I can actually feel good. And I know where to get the care I need.”