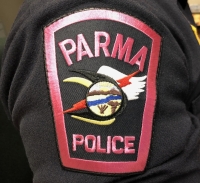 Fall fashion this year for the Parma Police Department will include vibrant pink patches, beards, mustaches and police ball caps – all in the name of charity. In early October, police officers began sporting pink police patches on their sleeves in recognition of Breast Cancer Awareness Month. Male officers who paid $60 each were allowed to put down their razors and grow facial hair. Female officers who paid $60 each were permitted to wear blue Parma Police baseball caps. The money raised will be donated to The Gathering Place, a facility which offers free programs and services to help support, educate and empower individuals and their families coping with cancer. “I am proud of our police officers’ participation in this fundraiser. My mother died from breast cancer, so this is personal to me,” said Mayor Tim DeGeeter.

In November, many officers will take part in No-Shave WishVember, a program started five years ago with A Special Wish Foundation. A Special Wish is a charity that fulfills the wishes of children across Greater Cleveland who are battling life-threatening illnesses.

Similar to the October breast cancer campaign, the male officers can grow facial hair, and the female officers can don baseball caps. This time, however, they will compete with 11 Northeast Ohio police departments to see who can raise the most money. Police departments that joined Parma last year included: Bay Village, Berea, Brooklyn, Brooklyn Heights, Chagrin Falls, Euclid, Moreland Heights, Notre Dame College, Pepper Pike, Rocky River and Warrensville Heights. So far every year, Parma has earned the most donations.

Finally, in December, the beards, ball caps and fundraising will continue, but it becomes personal as officers raise funds to support a fellow officer or officer’s family member who is facing a serious illness or hardship.

“These fundraisers build awareness and are a creative way for our officers to give back to the community and support each other,” said Police Chief Joseph Bobak.

For more information about No-Shave WishVember or to donate, visit www.Police4Wishes.org