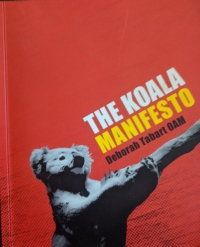 Deborah received one of Australia’s highest individual honors, the Order of Australia Medal (OAM) in 2008 and is the chair for the non-profit, Australian Koala Foundation. Deborah wrote a Koala Manifesto stating 10 solutions as to what needs to be done so the koala's existence is ensured and thrives, firstly by initiating into law, The Koala Protection Act. The book contains a plethora of current and historical information and pictures.

Before the devastating fires in Australia in 2019-2020, the Koala had already been heading toward endangered. Now, experts label them as functionally extinct as 2/3 died during those fires. Functionally extinct means that within 3 generations they could go extinct due to their fragmented habitat and lack of potential mates. Deborah recounts the history of the koala as in the millions to now less than 80,000. The first initial decimation of the population was the koala being killed for fur sold in the USA and Europe during the beginning of the 20th century. Now, habitat loss, and fragmented habitat caused by mining and the various forms of human settlement (housing, roads, agriculture etc.) is threatening their existence due to lack of eucalyptus trees (gumtrees) which is their home and food. Having their habitat fragmented leads to them being victims of cars and dogs, competition for eucalyptus trees, lack of potential mates and increase in disease.

Koalas are at the top of the list when we think of Australia. It is very sad that the government of Australia is lacking to take immediate action to preserve the precious koala, native to only Australia. Their situation is dire as is the whole forest and water system of Australia. I encourage you to read this book, read the Australia Koala Foundation website and write emails to the various governments of Australia to enact The Koala Protection Act.