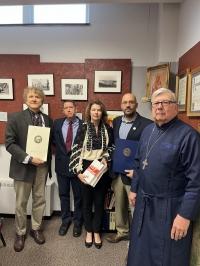 On Saturday, November 13, I was honored to be invited to attend the Holodomor commemoration at St. Vladimir Ukrainian Orthodox Cathedral on State Road. Having been an international studies major, concentrating in Soviet and East European studies, at the University of Dayton, I recall studying one of the 20th century’s most horrific events.  What is unfortunate is how few people are aware of this tragic story.

Typically, when one hears the term genocide they think of the Nazi “Final Solution” perpetrated against the Jews in the 1930s and 40s with images of concentration camps, emaciated human beings, and crematoria, where an estimated 6 million human beings were killed in what we now call the Holocaust. However, fewer are aware of the Holodomor that occurred in 1932-33 in Ukraine while the nation was under the control of the Soviet Union’s dictator Joseph Stalin, which led to deaths estimated as high as 7 to 10 million.

Holodomor comes from the Ukrainian words for hunger (holod) and extermination (mor). In 1932, the Russian-controlled Soviet Union began a policy of collectivization in which private farms were seized by the government.  Collective farms were to be run by locals “collectively,” who were forced to turn over large amounts of grain to the government, which it used to fund industrialization and militarization. With little food left over, the Ukrainian people found themselves in the midst of a man-made famine.

Today Ukraine finds itself, once again, in a fight for its survival against Russia. In fact, Russian President Vladimir Putin, a former Soviet KGB leader, seems hell-bent on resurrecting the Soviet Union. Beginning with seizing the Crimean Peninsula and eastern regions of Ukraine in 2014, which sparked the Russo-Ukrainian War, Putin and his cronies continue the cruel persecution of the Ukrainian people.

Parma has found itself home to many refugees and others fleeing Ukraine in recent years. As a result, the Ukrainian Village neighborhood on the State Road corridor is flourishing. Ukrainian culture abounds with Ukrainian schools, churches, flags, festivals, parades, etc. While their love of America is clear, they hold their homeland very dear. On that cold Saturday morning in November, State Representative Jeff Crossman and I were honored to be a part of the Holodomor memorial service at St. Vladimir’s. We were very impressed with how many children were involved in the event. Reading in Ukrainian and English, the Ukrainian community of Parma is clearly passing on their culture and history to the next generation. Although Putin and his predecessors have given it their best shot, the Ukrainian people thrive.

Before leaving, we were invited to visit the Famine Room, where we saw devastating pictures from the Holodomor. If you are interested in visiting this room and the Cathedral, feel free to contact any member of the clergy at 440-886-3223.

Best wishes to you and yours for a beautiful Christmas Season – shscaslyvoho Rizdva (Merry Christmas)!