From The Heart Of Ohios Ukrainian Community, UH Parma Stands With Ukraine 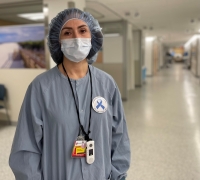 OR nurse Diana Skalksy has lived in the United States for decades but maintain close ties with the country of her birth, where she still has family.

In the heart of Ohio’s largest Ukrainian community, UH Parma Medical Center organized a relief drive for the war-torn country as Russian forces continued their assault on Ukraine.

The hospital’s Ukrainian employees, many of whom emigrated to the United States decades ago but maintain close ties with their homeland, were grateful for the support. On March 11, UH Parma sent three pallets of donations, including walkers, crutches, baby diapers, and personal care items, to Ukraine through MedWish International. The Cleveland-based nonprofit humanitarian aid organization founded by Lee Ponsky, MD, Chair, UH Urology Institute, has continue to hold relief supply drives around Cleveland.

"I'm proud of my hospital," says OR nurse Diana Skalsky, whose uncle, a pastor of a church in Ivano-Frankivsk, was sending supplies to eastern Ukraine, and now his town is being bombed. "Nobody is safe there right now."

Pharmacist Nina Protsyk moved to Parma when she was 4. Her parents remain in close contact with siblings, checking in daily with Nina’s aunts, uncles and cousins in western Ukraine, who are helping other Ukrainians flee and debating every day when to leave themselves.

“They’re staying put but trying to decide if they should flee as well,” said Nina. “They’re anxious.”

Just before war broke out, Veronika Pagsanjan’s brother had secured a visa and a plane ticket to immigrate to the United States. Now he is unable to leave. Ukrainian President Volodymyr Zelenskyy declared martial law when Russia attacked. All men of fighting age 18-60 are forbidden from leaving the country.

The nurse practitioner in gastroenterology, who was born in Russia, feels lucky her family left for Ukraine when she was 11. Now her mother and brother are in Dnipro in the southeast. And the Ukrainian and Russian sides of her family no longer communicate.

“They don’t talk to us anymore,” said Veronika, among the countless Ukrainians with Russian relatives who refuse to believe they’re being attacked by their brothers. “We’re enemies now. I wonder if I grew up in Russia, would I be that brain-washed? That’s my biggest fear.”

Even Americans with no ethnic ties to Ukraine are joining the fight. Leovi Shields, a PCNA/MA for Drs. Mahajan and Bhatt at UH Parma, suddenly bid farewell to her husband for a few weeks early in the war when the U.S. Navy veteran felt inspired to head to Ukraine to assist. The Parma Ukrainian Village resident empathizes with those Ukrainians whose lives changed overnight – who had to flee comfortable homes and secure jobs just to survive.

Before leaving for Ukraine, her husband told friends: As Americans, we are supposed to be the guiding light.