How Government Regulates, Profits From, Harm 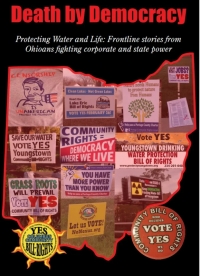 Death by Democracy, Coming to a Town Near You

Ever wonder why countless people and causes -- supposedly constitutionally-protected actions for human, animal, environmental and other rights -- are increasingly flouted by the government? As long as business has its hand in government affairs, business trumps people and planet. To wit: The Lake Erie Bill of Rights (LEBOR), a first of its kind anywhere "Rights of Nature" bill, granted the shallowest of our five Great Lakes sovereign protection under the law. LEBOR passed ballot muster, and made its way through the regular channels, but not long after its enactment, was overturned by Ohio Attorney General Yost. Yost ruled in favor of agribusiness owners, who actually sued the state for the right to pollute Lake Erie with animal waste.

Another heart-breaking example of regulated harm: A European company erected wind turbines in a major bird flyway in Ottawa County, Ohio, at Black Brook Bird Observatory, where the machines' blades slice up iconic American bald eagles. Federal government not only gives permission for the company to legally "take" a certain number of eagles, bats and other birds, but Ohio Department of Natural Resources (ODNR) granted Iberdrola special, illegal protection to keep public records secret. These records would have included critically-essential bird and bat mortality.
It's no surprise all government-regulated wildlife control agencies across America not only regulate harm, but actually profit from it. For example, Ohio Division of Wildlife (ODOW), like all wildlife agencies, uses the "maximum sustained yield" formula to deliberately maintain high deer populations for profit. When a certain number of "antlered" and "antlerless" deer are hunted by way of state-regulated permits, a rebound of population is guaranteed. If ODOW didn't do this, populations would naturally level off. Paradoxically, the public is fooled into believing more deer must be killed.
At the same time ODOW stays in business through lethal permit sales, the agency refuses to allow EPA-approved, 90+ percent effective, affordable, and humane immunocontraception on deer. PZP has been used for decades on captive mammal species and feral deer in surrounding states. If permitted, PZP could decrease Ohio's deer population -- something all lethal measures have failed to do -- and effectively put ODOW out of business.

At one time in the Buckeye State, licensed, humane wildlife rehabilitators were permitted to work with injured, orphaned animals. But about 10-plus years ago, when ODOW revoked their permits, the state agency began to hand out permits like candy to commercial trappers, with little or no oversight. After capturing animals and their families from mainly residences, trappers gas, drown, or by other means kill these beautiful animals. A recent brush with one of these serial killers, a particularly misogynistic jerk who verbally assaulted this writer for daring to request the humane release of trapped birds and other animals on private property, with ODOW's blessing (certain species can be released elsewhere, and all species can legally be released back onto one's own property), left no doubt that those who work in the trapping industry have no souls, but probably enjoy the killing. Trapping, "regulated" by ODOW, has created a holocaust for Ohio wildlife.

When we attempt to enact inalienable rights for nature, self, or other beings, and against business, government puts us in our place through arrest, or the threat thereof. Why else would Ohio and other states enact "hunter harassment" statutes that protect hunters' "rights" and violate all others by arresting them for free speech or invoking peaceful property rights? That government refuses to prevent harm, but works with business to regulate it, was recently driven home after reading stories of Ohioans whose valid referendums, initiatives, and court cases involving property, water, and other ecosystem rights were unequivocally and repeatedly shot down by local and state officials and corrupt judicial players. If you want to know more, check out the book Death by Democracy: Protecting Water and Life, written by Community Environmental Defense Fund activists.

Where our government is concerned, no consideration is afforded the individual, a frighteningly familiar, collectivistic form of government. There is hope, though. I have seen David make a difference against Goliath on more than one occasion, but it takes persistence and high hopes. As Calvin Coolidge wrote, "Nothing in the world can take the place of persistence."