Parma Fire Marshal Responds To His Own Five Alarm Fire 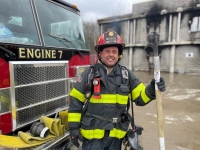 A five-alarm fire was coming, and Ricky Fetter’s only warning sign was shortness of breath. Just days before he got winded climbing up a hill to his truck, the Parma Fire captain was instructing the city’s new firefighters in a burning building. Loaded down with heavy gear at the live burn training – with five heart vessels more than 80 percent blocked – he feels lucky that a heart attack didn’t strike then. “Knowing what I know now, I could’ve died in that training,” says the Parma fire marshal and 28-year firefighter/paramedic, who would have been hauling an extra 70 pounds of gear on his 195-pound, 5-foot-8 frame. But the city’s EMS coordinator, who also runs University Hospitals Parma Medical Center’s EMS Education program, still had a few lessons to learn – and to teach his fellow firefighters and paramedics.

A few days later, walking up stairs to Parma City Hall from the nearby fire station, it happened again. Ricky reached the top and had to stop and wait several minutes. Fortunately, his wife Katie, a nurse, happened to FaceTime him at that moment. He was ashen-faced and out of breath. Katie knew he needed to see a cardiologist immediately. The EKG taken in the doctor’s office didn’t look good; Ricky, who has trained many paramedics and nurses, has seen quite a few in his time. The scheduled cardiac catheterization just a few days later revealed why: not only were all five cardiac vessels blocked, but his left anterior descending artery (LAD) – the widow-maker – was almost completely occluded. Raju Modi, MD, cardiologist with University Hospitals Harrington Heart & Vascular Institute, told Ricky he needed immediate cardiac bypass surgery.

“Ricky was a classic story of patients – especially men, and most especially men working in health care or as first responders – not always heeding their own advice,” said Dr. Modi. “His symptoms were very concerning and his catheterization confirmed my suspicions. However, I did not even expect such severe and diffuse disease, particularly a critical left main lesion, the widow-maker.” The grim news “put me in a panic,” Ricky recalls. He simply couldn’t believe he wasn’t leaving the hospital until he had major heart surgery.

Pablo Ruda Vega, MD, cardiac surgeon with UH Harrington Heart & Vascular Institute, performed a quintuple coronary artery bypass surgery early the next morning. Ricky was discharged four days later. He raved about the care from a team who had taken care of countless heart STEMI patients he’d brought them through past decades.

Ricky returned to the fire station two months to the day of his heart surgery. He believes his hard work during 36 sessions of Cardiac Rehab at UH Parma Medical Center was key to resuming the rigorous fitness level required for a firefighter. “They really pushed me and helped me prepare for the functional capacity test to come back to work,” said Ricky. “The guys around here can’t believe I’m back to work here already.”

His brush with death “scared the living daylights” out of the safety forces, Ricky said. Dozens of firefighters and police officers followed up on their own cardiac health after Ricky’s heart scare. Many underwent coronary calcium score tests – which only UH provides for free – that can detect calcification in the arteries of the heart and assess risk of future heart attacks. Some firefighters underwent stress tests, started medication for hypertension or needed cardiac catheterizations. “I always promoted heart care, but now I can speak to it from personal experience,” said the Midwest Region director for the American Heart Association, who also survived Hodgkin’s lymphoma with eight months of chemotherapy and radiation when he was just 28.

In the months after his open heart surgery, this survivor hit two major milestones: he turned 50, and he and his wife celebrated 30 years of marriage on a trip to Hawaii. The parents of three, including two medics, are breathing easier now with a new lease on life – and an unexpected lesson to share. “Being a firefighter/paramedic alone is an extremely stressful line of work,” says UH Parma Chief Medical Officer Christopher Dussel, MD, who is Medical Director of the Parma Fire Department. “The last two years dealing with the pandemic have intensified that, and seeing what Ricky went through has really raised awareness of the occupational stresses. ”As frontline workers, you have to take care of yourself so you can take care of other people.”